Built from circa 1170 by the Fitz Warin family, it was altered and extended in the 16th, 17th and 20th centuries. The original part of the house makes Appleton Manor one of the oldest surviving inhabited manor houses in Britain. The architectural historian Sir Nikolaus Pevsner called it, "an amazing survival". Surrounded by a dry moat and situated six miles south-west of Oxford, it was successively owned by the Caston, Pestyt, and Fettiplace families. In 1772, Robert Southby (1743-1824) LL.D., purchased the manor from the Cooke family. His nephew sold it in 1880 to to Mrs. Weaving, whose trustees sold it to the Rev. Charles Frederick Reeks in 1912. In 1924,  it was purchased by Lawrence and Kitty (Livingston) Timpson, formerly of Maizefield in New York. They hired architect Detmar Blow who specialized in the arts and crafts style to renovate and extend the house and the results were published in Country Life....
zoom_in 1 images 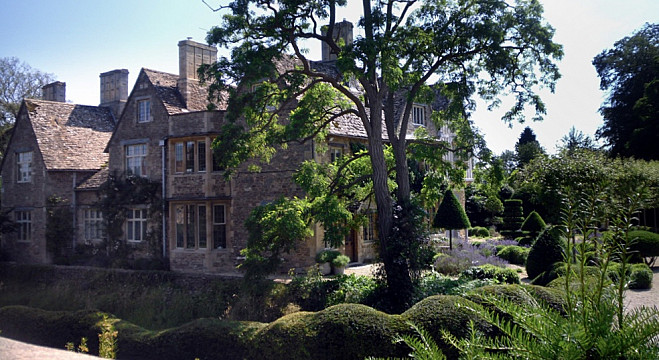 The current owners have had the gardens beautifully landscaped by the celebrated garden designer Arne Maynard. Some of the prinicipal features include topiary shapes and pleached crab-apples to a kitchen garden with a restored antique glasshouse and moat. It remains a private residence and is not open to the public.

Secret Houses of the Cotswolds By Jeremy Musson