Completed in 1894, for the late Mrs Mary (McGonigal) Matthews (1827-1893), the Irish-born former mistress and employee of the larger than life founder of the Singer Sewing Machine Company, Isaac Singer. Mrs Matthews died in the same year that work started on the house so that by the time it was finished it belonged to her youngest daughter, Mrs Florence (Matthews) Pratt who was married to Harry Ruthven Pratt. Situated on Bellevue Avenue at the corner of Parker Avenue, it was next door to Wayside and opposite Elm Court. It was designed by John Dixon Johnston who five years later used its plans as the inspiration for the George Griswold Haven house on Narragansett Avenue. The Pratts rented their villa to several big names in Gilded Age society, most notably Harry Lehr who co-hosted the fabled Dog's Dinner here....
zoom_in 3 images 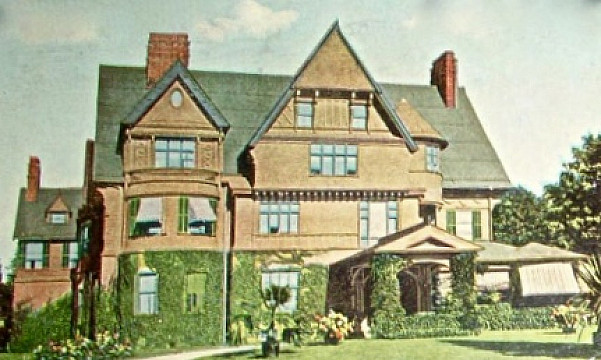 H. Ruthven Pratt, of New York and the American Colony in France

The first cottage built on this property belonged to Peter Parker of Boston, one of the pioneers of the summer colony. After he died, he left the cottage to his two elder grandchildren, Edward Parker Deacon and Ida Deacon. Edward married the young and beautiful Florence Baldwin but he made the headlines in 1892 when he shot and killed her lover in her apartments at Cannes in France. Their eldest daughter, Gladys, was the second wife (after Consuelo Vanderbilt) of the 9th Duke of Marlborough and their youngest daughter became the Princess Radziwill. In the meantime Edward's sister Ida lived here until her death in 1883 when her brother sold up to Mrs Mary Matthews.

In 1893, the 58-year old Mrs Matthews commissioned J.D. Johnston to build her a new house on the property in the Queen-Anne style but incorporating parts of the original Parker cottage. The work went ahead, but Mrs Matthews dropped dead in the same year and the finished house was inherited by her youngest daughter, Mrs H. Ruthven Pratt.

The Pratts spent just one season (1894) in the new house, and preferring Europe to Newport they became better known as members of the American Colony in France. They may not have been overly enamored with the house, but for the next twenty years they successfully leased it to a long list of millionaires that included some of the best known names in American aristocratic society: From 1896, Mrs Potter Palmer of Chicago resided here for her first two seasons in Newport, kicking off with a dinner for her niece, Julia Dent Grant, who two years later would marry a Russian prince at Beaulieu.

Partying with the Potter Palmers

In September, the Potter's held a ball here for 200-guests primarily in honor of their niece, Julia, but also for their two sons, Honoré and Potter Jr.: "the large hall... was used as the ballroom. In deep fringes, following the moldings, lining the balconies and at intervals of eight feet on the face of the balustrades, (hung) garlands of green with old Roman floral wreaths... all about the improvised ballroom were myriads of tiny electric lamps shining through delicates traces of green vines... the large mantel and fireplace were entirely concealed by rare varieties of caladiums, farleyense, ferns and lotus flowers, with pink electric lights gleaming among them like will-o'-the-wisps... From the Corinthian columns which support the roof cascades of white flowers fell intertwined with vines."

"The dancing was informal until twelve-thirty, when supper was served. An addition has been made to the wide veranda, and there the guests sat down to small tables surrounded by a mass of oriental decoration. The menu was: Essence de Clovisen Tasse; Brissotains de Jambon Périgueux; Suprême de Poulet, a la Montpensier; Bécasse sur Canapés; Salade; Glace; Turban de Fruits; Gateaux; Bonbons; Marrons; Café; Champagne; Apollinaris."

The ball was unanimously considered a great success. Curiously though, French accounts of the evening insisted on referring to Arleigh as a "modest" cottage whereas the American press never failed to describe it as anything other than "grand". Clearly Potter Palmer himself was somewhere between the two opinions: In 1897, he consulted with its original architect, John Dixon Johnston, to have plans drawn up of a much larger version of Arleigh, but he died the following year and the plans never came to fruition.

"Isn't it Enough that I Have to Endure Your Presence Here?"

Mrs Potter was followed by Louis Lasher Lorillard who had just sold Vinland but it was between 1901 and 1904 that Arleigh reached the peak of its notoriety on the Newport scene when leased to Harry Lehr and his long-suffering wife, Bessie Wharton Drexel.

When Bessie recalled her farcical marriage to "King Lehr" she described Arleigh as, "the scene of my calvary. How often its walls would echo to the bitter reproaches, the recriminations hurled at me, the incessant demands for more money. 'Isn't it enough that I have to endure your presence here? I hate the sight of you - you are hideous to me. The only thing you can do for me is provide me with money which I at least have the taste to spend properly...' Sick at heart I would give in to him, sign endless cheques."

In 1903, Reggie Vanderbilt was wanted by the police in the State of New York to give evidence against the Canfield Casino which had been raided on the same night he lost $150,000. Hoping to avoid this unwanted publicity, he resolved to stay out of New York until the case had blown over, but that also meant not seeing his fiancée, Cathleen Nielson. Rather than wait for a large public wedding, Harry and Bessie lent them Arleigh where they were married in an intimate ceremony on April 14.

By 1904, having grown bored of the repetitiveness of society life at Newport, Harry Lehr came up with the idea of giving a Dog's Dinner, co-hosted by Bessie and Mamie Fish: "There must have been at least a hundred of them, big dogs and little dogs, dogs of every known breed; many of them came in fancy dress. The dinner was served on the verandah, leaves from an ordinary dining-table placed on trestles about a foot high. The menu was stewed liver and rice, fricassée of bones and shredded dog biscuit. It must have been appreciated, for the guests ate until they could eat no more. Elisha Dyer's dachshund so overtaxed its capacities that it fell unconscious by its plate and had to be carried home."

From 1905 up until they bought "Villa Rosa" in 1913, Arleigh was the summer domain of the Californian Gold Rush success story James Ben Ali Haggin and his second - considerably younger - wife from Kentucky, Pearl Voorhies. In 1911, Pearl hosted, "one of the most "elaborate and varied entertainments of the season... dinner and dancing for 100-guests and decorations featuring 18,000-lillies and 4,000-American Beauty roses."

In 1917 and 1918, Arleigh was leased to perhaps its last summer residents, Hamilton Carhartt, and his wife, Annette. After two seasons here, Carhartt - the workwear manufacturer from Detroit - leased Seaview that shortly afterwards was incorporated into the now iconic Seaview Terrace. From then, or soon afterwards, the house sat empty and fell into an increasingly poor state of repair so that it became an eyesore.

By 1931, Mrs Ruthven-Pratt - who by then had permanently settled in Europe - had stopped bothering to pay her taxes on the property and Arleigh was then seized by the state and sold at auction the following year. The new owner was Frederick J. Stevens and - as it often did back then - it was almost immediately, and very conveniently, burned to the ground on June 13, 1932. Three men were arrested for arson and then subsequently released without charge. The land that measured 43,403-square feet sat empty until 1972 when the Heatherwood Nursing Home that still stands today was built here in 1972.

King Lehr and the Gilded Age: With Extracts from the Locked Diary of Harry Lehr By Elizabeth Drexel Lehr, Lady Decies