Built circa 1786, for John Porteous, at the corner of King and Cross Streets. On completion, he sold the house to America's most storied traitor, mercenary, and adventurer, Major-General Benedict Arnold, who lived here from 1787 to 1791. Arnold and his sons had initially made a fortune here and invested heavily in land, but they soon drew the ire of local residents for their underhand business practices....
zoom_in 1 images 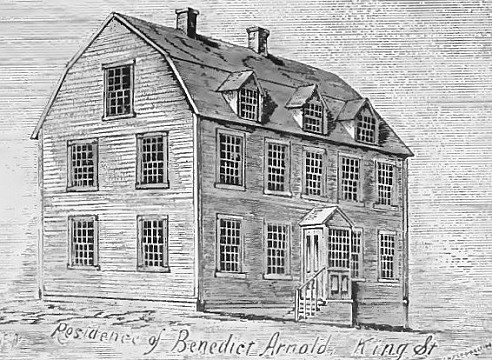 From Saint John, Arnold traded with the West Indies and North Carolina and for that purpose had a large warehouse on King Street. When his fortunes took a turn for the worse, the warehouse went up in smoke and his business partner, Munson Hoyt, made it be known that it was Arnold's hand that put it to the torch to collect on the insurance. Arnold charged Hoyt with slander and for "blackening my character". In court, Hoyt retorted: "It is not in my power to blacken your character, for it is as black as it can be". The judge awarded Arnold 20-shillings which so enraged the crowd outside that they burned Arnold's effigy, complete with wig and cock hat, until the Mayor dispersed them.

In September, 1791, Arnold placed an advertisement in the local paper offering for sale: "excellent feather beds, mahogany four-poster bedsteads, an elegant set of Wedgwood gilt ware, cabriole chairs covered with blue damask, and a lady's elegant saddle and bridle". Having packed the rest of their belongings, after the sale the Arnolds left for London.

The house was then purchased for £350 by Jonathan Bliss (1742-1822), Attorney-General and Member of the Legislative Assembly for New Brunswick. All four of his sons were born here and his wife, Margaret Worthington, died here in 1799. Bliss stayed in the house until 1809 when he was appointed Chief Justice of New Brunswick and moved to Fredericton. In 1811, Bliss sold the house to Charles McPherson who was its last private owner. Later in the same century it was converted into the Bragg Building, made up of stores and offices. In 1870, it was deemed a fire hazard and replaced by brick buildings.

Through a Howling Wilderness: Benedict Arnold's March to Quebec, 1775 By Thomas A. Desjardin