Built between 1600 and 1630, for Philippe Hotman (d.1643), Seigneur de Plailly-Montmélian, whose father (the French Ambassador to Switzerland) bought the estate in 1570. It remained a seigneurial manor until it was purchased in 1798 by Napoleon's brother, Joseph-Napoléon Bonaparte (1768-1844) and his wife Marie-Julie Clary as their new home. It was here that the Convention of 1800 was signed that ended a two year quasi naval war fought in the Caribbean between France and the United States....
zoom_in 5 images 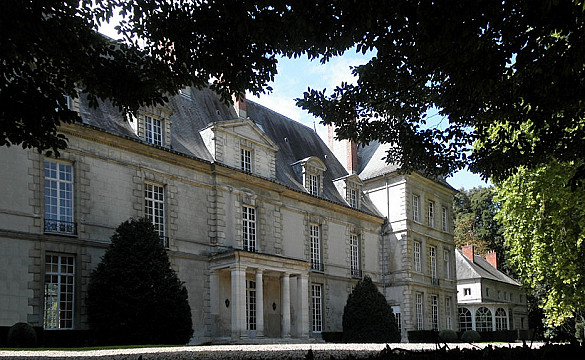 Bonaparte was very attached to Mortefontaine and he laid out a magnificent park here with tens of follies and faux-ruins plus an assortment of bridges and towers, and underground tunnels that connected one side of the estate to the other - similar to what he laid out at Point Breeze in New Jersey, the first version of which he styled on his beloved Mortefontaine. In 1815, after Napoleon's defeat at Waterloo, Joseph made his escape to America, living for the next twenty years at Point Breeze. While he lived in exile, his wife lived here almost permanently until he sold it in 1827. In 1841 Bonaparte was re-united with his wife and lived out his last years at the Palazzo Serristori in Florence.

Bonaparte sold Mortefontaine to Louis-Henri Bourbon, last Prince de Condé, but three years later he was found swinging at the end of a rope. Rumors ran rife that either his revengeful illegitimate daughter, Sophie, had plotted his demise with his Orléanist rival for the French throne, Louis Philippe I, or it was the result of a sexual act gone wrong. Either way, Mortefontaine was soon afterwards inherited by the same illegitimate daughter implicated - but found innocent - in his death. In 1894, retaining the "Petit Parc" she sold the "Grand Parc" to the north of the chateau to the Duke of Gramont and his wife, Marguerite de Rothschild, where they built the palatial Chateau de Vallière.

Mortefontaine remained in Sophie's family until 1928 when it was sold to Louis-René de Gramont, who grew up the Chateau de Vallière. Having by then fallen into a bad state of repair, he carried out the much needed renovations only to be evicted during the Second World War when it was occupied by the Nazis. Five years later, he sold it to an Order of Dominican Monks and it became a school which operated until 1985 when Mortefonatine was purchased by Monsieur Pontheiu who converted it into a luxury hotel. This eventually failed by about 2004 and today it is once again a private home.

Napoleon's Family: The Notorious Bonapartes and Their Ascent to the Thrones of Europe By Desmond Seward

The Queen's Fortune: A Novel of Desiree, Napoleon, and the Dynasty That Outlasted the Empire By Allison Pataki