Completed in 1888, for the "Copper King" Senator William Andrews Clark (1839-1925), and his first wife Catherine Louise Stauffer (1840-1893). The Copper King Mansion is also sometimes referred to as the W.A. Clark Mansion. At the time of it's construction it's magnificence was unparalleled in the west and it is particularly noted for it's exceptionally lavish woodwork interior. Today, the 34-room, Queen Anne-style mansion is a popular bed-and-breakfast that has been run as such by the same family since 1953. Guided tours are available during the summer, or by appointment.
zoom_in 1 images 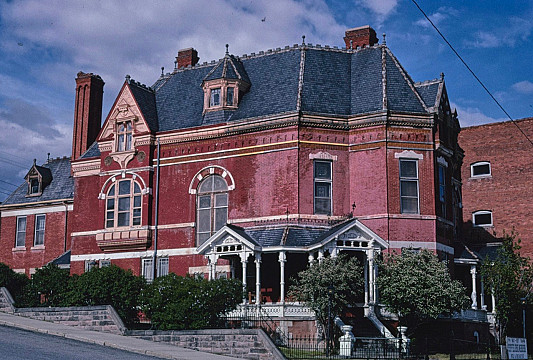 Clark was one of Butte's three "Copper Kings" along with Marcus Daly (1841-1900) and Fritz Augustus Heinze (1869-1914). The copper he mined was used in the wires being laid out to feed electricity across America. Clark lived in Montana for over forty years and on his appointment as a Senator in 1899, he purchased Stewart's Castle in Washington D.C. By 1900, he had amassed a personal fortune of $50 million, making him one of the richest men in America. His interests, both professional and personal, spread across many fields and he was a significant philanthropist.

In 1880, the Clarks embarked on what would be the first of many trips to Europe. Having returned to Butte laden with art and a finer appreciation of architecture, they employed the architect C.H. Brown to design a suitable family house. Under the direction of D.T. McDevitt, work began in 1884. The interiors were designed by W.F. Beal & Co., of Chicago, but it was a team of live-in French artisans who were responsible for the craftsmanship that went into the carved panelling and filigree seen in the imported ash, oak, walnut, birds-eye maple, cherry and mahogany.

The house took four years to complete at a cost unheard of before in Montana - $250,000. In fact, the Clarks spent more on their home than the county did on the Silver Bow County Courthouse, and yet the sum was only half of what Clark's mines were then turning over in one day!

The three story, 34-room mansion is typically Victorian in it's Queen Anne-style architecture. Built of smooth red brick with a white trim, many of the windows are arched and the exterior features several elaborate decorative elements such as the white timber framed portico.

Each of the ceilings have individually hand-painted frescoes and the cornice are of elaborate plasterwork finished with gold leaf. The 639 individual panes of stained glass windows are French, possibly designed by Louis Comfort Tiffany (1848-1933). Some were embedded with gems and the one over the front door bears the initials 'W.A.C.'. They also have internal shutters that neatly fold back into their own pockets - a feature more commonly associated with 18th century design.

There are 90 doors within the house, many of the rooms were designed with different hand-carved woods while all the floors are parquet. The nine hand-carved fireplaces were imported from Europe and the beautiful carved oak staircase depicting flowers and birds - that took as long as the house itself to complete - was temporarily dismantled in 1904 to be displayed at the World's Fair in St. Louis.

The 64-foot ballroom on the top floor has it's own pipe organ and a bathroom on the second floor features a shower that sprays water from a number of different apertures in a 360 degree circle around the body: According to an article in the Deseret News in 1988, the then owner said it was "like taking a bath in a car wash"! Hot and cold running water was fed throughout the house via a 1,500 gallon tank hidden within the slate-tiled roof. There was a telephone with a direct line to both the police and the fire station; and, chandeliers were lit either electrically or by gas.

Clark had been collecting European art seriously since 1880. In order to easier facilitate negotiations with dealers, he taught himself both French and German. His mansion in Montana became a veritable museum of both European and American masterpieces. After his death "The Clark Wing" was specifically added to the Corcoran Art Gallery in Washington D.C. to house his collection that from 2014 has been absorbed by the National Gallery of Art.

His mansion in Butte was one of at least four houses that he owned, but he always felt he 'owed' the city and though very different from New York or Paris (where he kept grand mansions), he always had a strong attachment to the place.

After his first wife, Kate, died in 1893, Clark somewhat controversially married the girl who had been his teenage ward, Anna Eugenia La Chapelle (1878-1963) - he was 62, she was 23! On his death, he left the mansion in Butte to his eldest son by his first marriage, Charles Walker Clark (1871-1933). Whereas Charlie's younger brother, William Andrews Clark Jr. (1877-1934), was a major philanthropist - establishing among others the Los Angeles Philharmonic - Charlie was a gambler, and it wasn't long before he sold the house to cover his debts.

The new owner - whose name we are as yet unable to find - sold the remaining furniture in the mansion before selling it to the Helena Diocese of the Catholic Church. For several years, it became a nuns home and they converted the ballroom on the top floor into a chapel. The fresco that featured naked cherubs in the master bedroom was not to their exacting tastes either, and they painted over it. The nuns moved out in 1950 and the mansion gathered dust for the next three years as it remained on the market.

In 1953, Anna M. Walsh (1899-1964), the widow of Zamri Cote (1895-1951), purchased the mansion and set about restoring it to it's former glory. To help with the costs of maintaining such a house, she started to operate it as a bed-and-breakfast. After her death, this operation was continued by her daughter, Ann Cote (1921-1992). Both women (the latter became Mrs Smith) not only lovingly restored and maintained the house, but they gradually filled it up again with period antiques.

In 1970, the mansion was added to the National Register of Historic Places, and today Mrs Smith's children and grandchildren continue to care for the house and run what is undoubtedly one of, if not the, most spectacular 19th century bed-and-breakfasts in Montana.