Built in 1750, for Richard Tonson (1717-1772), M.P., for Windsor, and the great-nephew of Jacob Tonson (1655-1736), Dryden's publisher and founder of the famous Kit-Kat Club. In 1767, Richard inherited the portraits of the members of the Kit-Kat Club and he built a gallery at Down Place specifically for them. "Delightfully situated on the River Thames between Maidenhead and Windsor," in 1792 Down Place was described as, "the seat of the late Duke of Argyll, and now of John Barker Church (1748-1818)". In 1774, Church had fled to America under an alias; in 1777, he eloped from New York to Boston with Angelica Schuyler; and, having made a fortune returned to England in 1785. At Down Place, the Churches, "lived in extravagant style and their doors were always open to distinguished American (and French) visitors". Church was a, "dedicated gambler" and his gambling circle included the Prince of Wales and Charles James Fox....
zoom_in 2 images 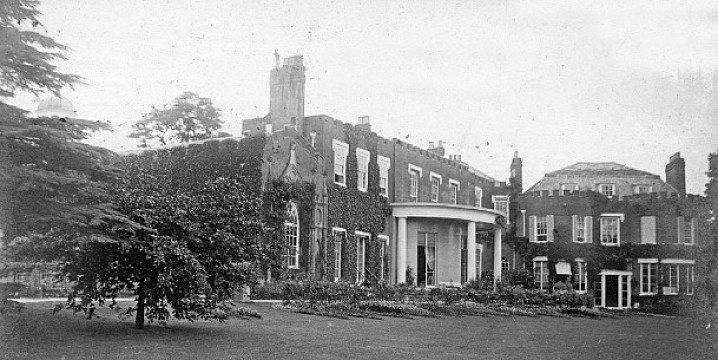 By 1807, Down Place was sold by Mr Hudleston to Henry Harford (1758-1834), 5th Proprietor of Maryland. Harford was the illegitimate but only son of Frederick Calvert, 6th Baron Baltimore. He became heir to all his father's vast estates, including the Colony of Maryland in America, but because he was born out of wedlock he could not succeed to his father's aristocratic title. After the Revolution, Maryland became part of the United States of America and the British government paid Harford £100,000 in compensation.

Henry Harford died in 1834 and his eldest son, Frederick Paul Harford (1802-1860), succeeded to Down Place. He was a former Guards officer and lived here with his wife, Louisa, who died here in 1876. Down Place passed to their son, Frederick Henry Harford (1841-1926), who lived here with his wife and their two children plus 11 live-in servants. They were resident when the black-and-white photograph above was taken in 1906.

In 1951, Hammer Film Productions were in search of a base to make their budget horror films and leased Down Place from Major Frederick Reginald Harford (1882-1955) - great-grandson of Henry Harford - who grew up here with his parents and sister but later moved to nearby Beaconsfield. Hammer Productions built the Bray Studios in the grounds and from then many cult productions have been filmed here. The house remained unoccupied but in 2010 a proposal was put forward to convert it into apartments.

Hammer Complete: The Films, the Personnel, the Company By Howard Maxford