Completed in 1889, for Sir George Alexander Drummond (1829-1910) and his second wife, Grace "Julia" Parker (1859-1942). Standing on the corner of Sherbrooke and Metcalfe streets, this red sandstone mansion was the first in the city to be built in the Richardsonian Romanesque style. It was noted for its superior stonework and superb ornamentation; and, as one of the city's most distinctive mansions, it was often mentioned among the likes of Ravenscrag. Demolished in 1926, the site on which it stood is now the headquarters of the International Civil Aviation Organization....
zoom_in 5 images 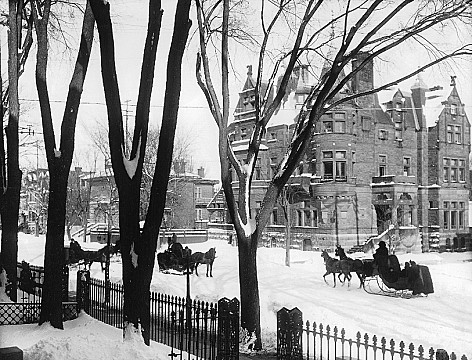 Drummond owed his education at Edinburgh University to his sister's second husband, John Redpath (1796-1869), who having arrived barefoot in Canada went on to build Terrace Bank. In 1854, having finished his education, Redpath invited Drummond to Montreal and three years later Drummond married his daughter, Helen Redpath (1827-1883), who would later become a leader in the movement for women's rights.

Drummond took control of the sugar refinery which was the cornerstone of the Redpath fortune and went on to become President of the Canada Refinery Company, the Bank of Montreal and the Mount Royal Club. Dividing his time between Montreal, Cacouna and Huntlywood, he was first knighted and then made a Senator, having served as Chairman of the Conservative Party. His legacy continues through the Drummond Foundation.
New Wife, New House

A year after the death of his first wife, Drummond remarried Grace "Julia" Parker (1859-1942) who became well-known as a leader of charitable movements not only in Montreal, but across Canada and in Europe too. Some thirty years his junior, Julia was the young widow of the Rev. George Chetwode Hamilton (1857-1880), of the Hamiltons of Hamwood, who had died four years before at Cannes in the South of France.
As something of a wedding present for his new wife, Drummond colluded with his nephew - the architect, Sir Andrew Thomas Taylor (1850-1937) - to build a city mansion on land he had purchased some years previously at the corner of Sherbrooke and Metcalfe streets. The final architectural plans drawn up by Taylor & Gordon were approved by the Drummonds in January 1888, when work began on its construction.

In February, 1889, though still some eight months before its completion, public interest in the project was reflected in an article that appeared in the Montreal Witness: "This beautiful house is... to be enriched by a wealth of carving and ornament, every detail of which has been thought out by the architect with as much care as if he were working out his ideal in marble instead of sandstone. The general design of the house is strong and good. The corner tower, which is still the tower of a house not of a fortress, and the two gables rising steeply to the grotesque 'beastes' (gargoyles) that terminate them, produce a most admirable effect. The material of the two street fronts is a very rich and beautifully textured sandstone, and not only are capital and panel to be richly carved, but these belts of carven ornaments are to sweep about the house; and, richly carved and ornamented porch, oriel window, and balcony add beauty and expansion to the whole".
At a cost of CDN$80,000, work was completed and the family moved into their new home on Christmas Eve, 1889. Drummond wrote to his brother-in-law in England, Peter Redpath (1821-1894), modestly stating, "my house has been, in an artistic point of view a great success, but has been much exaggerated in importance. It is much smaller than - he refers to the city mansions recently put up by Richard B. Angus and Sir John Abbott - and in short is not a bit too big for my present requirements".
Layout

Standing over a basement of local rock-faced limestone, the imposing red sandstone mansion with antique stained glass windows stood 3-stories high with a windowed attic. It had a distinctly Scots Baronial feel to it. Rectangular in shape, the corner that dominated both streets on which it stood was marked by a high tower and a tall chimney with a sundial. It was entered via stone steps that led up to a portico supported by spiralled stone columns. Passing through the vestibule, the visitor came out into the richly decorated hall. The ground floor was marked by dark coffered panels, great marble fireplaces and towering mahogany spiralled columns either side of the foot of the central staircase.

Leading off from the central hall was the drawing room (overlooking Sherbrooke Street), dining room, fernery, smoking room and library. Though one of the city's most prolific collectors of the Old Masters, Drummond chose to live with his art throughout the house rather than containing his favourites in one art gallery.

In April, 1894: Lady Aberdeen - Ishbel Maria Hamilton-Gordon (1857-1939) - and her husband the Viceroy lunched with the Drummonds at their new house in Montreal. She commented in her diary that it was, "a very nice house" and, "they (the Drummonds) do everything very well, and know how to do it... Lovely pictures".

Sir George Drummond died in 1910, but his widow continued to live there and was often visited by admirers of Drummond's art collection and of course members of the family: One of their grandchildren, Helen Elizabeth Drummond (1902-1993), afterwards Mrs Henderson, remembered the vast central staircase that separated the first and third floors - which made heating the house in the depths of winter no easy feat.

The house was finally sold and demolished in 1926 to make way for offices as urbanisation crept up upon the once peaceful and automobile-free Sherbrooke Street.

The Architecture of Andrew Thomas Taylor: Montreal's Square Mile and Beyond By Susan Wagg

Montréal Then and Now By Alan Hustak