Built 1850, for Henry Beckett (1791-1871) and his wife Mary Lyle (1796-1829). The British Consul at Philadelphia obliterated the mansion put up by Napoleon's brother - Point Breeze  - purposefully going out of his way to eradicate any last trace of the Bonaparte family there. In turn, Beckett's Italianate mansion was dramatically remodelled beyond recognition by the Californian Harris Hays Hammond (1881-1969) whose brother built Hammond Castle. The house was eventually lost to fire in 1985....
zoom_in 2 images 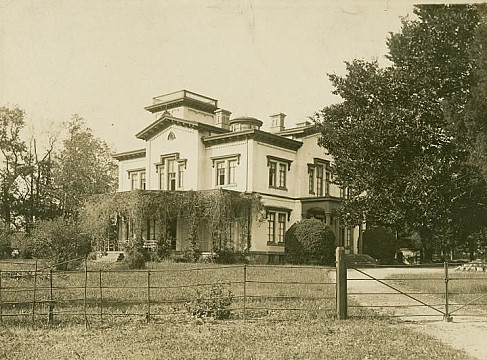 In 1874, three years after Beckett died, his heirs sold the property to The Vincentian Brothers of Philadelphia who used the property both as a summer retreat and somewhere to train its missionaries.

In 1911, the Brothers sold the house and its remaining 242 acres to Harris Hays Hammond (1881-1869), a wealthy Californian financier, and his wife Elise Steele (1883-1971) who used it as a summer home. The following year, they completely changed the house by enclosing the original structure within another layer of building that gave it an altogether classical appearance. Internally they added elaborate marble fireplaces, a sweeping staircase and ornate crystal chandeliers in their bedroom, ballroom, drawing and dining rooms.

The principal reception rooms were panelled in antique pine that had been salvaged from an old English manor house. In the study, there was a concealed metal stairway that was opened by pulling on one of the bookcases, which then led down to the wine cellar. When the Divine Word missionaries purchased the property and discovered the hidden cellar full of alcohol that had been purchased during Prohibition, they had all the bottles removed and subsequently smashed by the police.

In the gardens, the Hammonds built a swimming pool next to a pavilion with wrought-iron pillars and a copper-roof. They employed stonemasons to build a Chinese water garden with two further swimming pools on which floated several small boats - a similar idea to the swan-shaped pleasure boats that once adorned the lake at Point Breeze. Aside from the magnificent gardens, there was also a croquet lawn and tennis court.

Hammond was a financier who lost everything in the Wall Street Crash of 1929. In 1932, he was declared bankrupt and the bank possessed his house and estate at Bordentown which then remained empty for over a decade. Hammond wasn't finished though and within just four years of being on his knees, he had made another fortune of $2 million. Despite his reclaimed wealth, he chose not to buy back the once-loved summer home. Instead, in 1941 it was purchased by the Society of the Divine Word for $165,000. The house was eventually destroyed by a fire in 1985.