Built 1821-22, for John Charlton Clarkson (1791-1856) and his wife Louisa Matilda Lawrence Hicks (1797-1859). Standing on Clarkson Hill, the white late Georgian house with green trim was given a mansard roof in 1853. Today, it is the oldest building on the campus of Clarkson University, so named for the same family who built Holcroft and afterwards established the university in 1896....
zoom_in 1 images 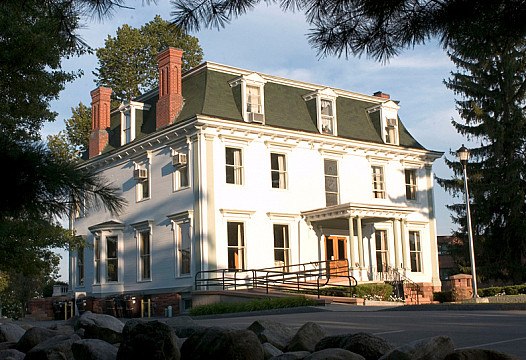 John C. Clarkson's ancestor, Matthew Clarkson (1664-1702), came to America at the end of the 17th century as Secretary to the Colony of New York. The Clarksons quickly became one of the most influential families in New York and aside from having a tendency to marry their cousins, they also married into other prominent families including the Livingstons, Van Cortlandts and de Peysters. John's father, David, and uncle, Garrit Van Horne, co-owned a successful shipping firm in New York City and in 1803 they bought four-fifths of the Town of Potsdam, New York. In 1818, three years after his father's death, John came to Potsdam acting on behalf of his uncle as his attorney and land agent.

Four years later, John C. Clarkson built this family home - known as the "Mansion House" - at the top of Clarkson Hill, where he remained until 1836. On returning to New York, his father's first cousin, Levinus Clarkson, moved into the Mansion House with his wife Ann Van Horne. Levinus died here in 1845 and his widow stayed on with their children until about 1853 when it was taken over by more relatives from New York: T. Streatfeild Clarkson (1824-1902) and his wife Ann Mary Clarkson (1831-1895), a maternal niece of David Levinus Clarkson, President of the New York Stock Exchange.

In 1883, Thomas remodelled the house, adding the mansard roof as seen today and renaming it "Holcroft House" in reverence to his great x4 grandmother, Elizabeth Holcroft. She was the daughter of Sir Henry Holcroft (1586-1650), M.P., of Westminster and Greenstreet House in East Ham, Essex, England. Elizabeth and her husband, the Rev. David Clarkson (1622-1686), were the ancestors of all the Clarksons mentioned herein.

Confusingly, Thomas' brother-in-law shared the same name as himself: Thomas Streatfeild Clarkson III (1837-1894) who grew up at another Clarkson property in Potsdam at "The Homestead" on Clarkson Hill which was lost to fire in 1909. Privately wealthy through investments in stocks and property in New York City, Thomas III ran the combined 1,000-acre family farm with his brother, Levinus.

When his brother died, Thomas III started to actively encourage and finance a variety of local businesses, most notably the Clarkson sandstone quarry, while assisting in the education of the people of Potsdam. In 1896, two years after his death, his sisters established the Thomas S. Clarkson School of Technology in his memory which has since become Clarkson University.

When Thomas III died a widower in 1902, he left Holcroft to his unmarried daughter Annie Clarkson (1856-1929), who donated Holcroft and the land on Clarkson Hill to the university dedicated to her uncle. At that time a local newspaper recorded:

Aug. 31, 1927. It became known today that Miss Annie Clarkson has given to Clarkson College her estate known as 'Holcroft' on Maple Street. Last June, Miss Clarkson deeded to the college all the Clarkson estate in that vicinity, comprising about six hundred acres of land. At that time she reserved the residence of 'Holcroft' and about twenty one acres. This she now gives to the college.

Having served variously as a residence hall for women and a center for administration and health services, today Holcroft Hall houses undergraduate admissions. It was renovated in the 1980s to resemble its appearance in 1850 and remains as a testament to the influential and philanthropic family that founded the university over a century ago.