Completed in 1848 for the "Greatest Showman," P.T. Barnum (1810-1891) and his first wife, Charity Hallett (1808-1873). It was modelled after the Royal Pavilion in Brighton, England, and was brought to fruition in rural Connecticut by the Bohemian-Jewish architect Leopold Eidlitz, who'd only arrived in New York three years before. The Neo-Moorish style in which it was built gained popularity predominantly in the British Raj but this was the first example of its kind in America and it was designed by the first Jewish architect to practice in America. L. Frank Baum, author of The Wonderful Wizard of Oz, was reputed to have not only taken inspiration for his humbug wizard from Mr Barnum, but also had Iranistan in mind for the castle in the Emerald City....
zoom_in 8 images 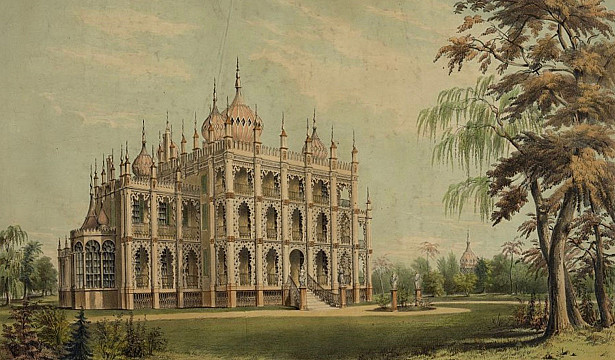 Phineas Taylor Barnum was brought up in straightened circumstances at Bethel, just over a mile from Bridgeport, Connecticut. In 1841, he started "Barnum's American Museum" on Broadway in New York City and his rapid rise to fame was almost as extraordinary as the live acts and curios that made his 'museum' an unmissable tourist attraction. He lured literally millions of visitors through his doors with characters such as 'General Tom Thumb'; a beautiful albino woman and her giant python; the 'Feejee Mermaid'; a hairy child dubbed 'Wild Boy'; and the 'Wonder of the World,' a Tom Thumb-sized armless man who used his feet to wind his watch, play musical instruments, and fire a pistol.

Barnum made the leap from sensationalist to showman when he toured Europe in 1844-45. In his first week in London, Baroness Rothschild sent a carriage for himself and Tom Thumb to 148 Piccadilly where they entertained "about twenty lords and ladies". At the end of the evening, "an elegant and well-filled purse was quietly slipped into my (Barnum's) hand, and I felt that the golden shower was beginning to fall!" His crowning achievement was realized shortly afterwards when he and Tom Thumb were then invited to Buckingham Palace to meet Queen Victoria. By the time he arrived in the fashionable seaside resort of Brighton he had already seen some of the grandest houses in the world, but it was there that he first clapped eyes on the Raj-inspired Royal Pavilion and he asked an architect in London to draw up plans - "differing sufficiently to be adapted to the spot of ground selected for my homestead" - to take back with him to America.

"An Advertisement of My Various Enterprises"...

Having already purchased 17-acres slightly north of what is now Seaside Park in Bridgeport (but then still part of the neighboring town of Fairfield), the Barnums had already thought about what kind of home they might build there: "I determined first and foremost, to consult convenience and comfort. I cared little for style, and my wife cared still less; but as we meant to have a good house, it might as well, at the same time, be unique". He then confided, "In this, I confess, I had 'an eye to business,' for I thought that a pile of buildings of a novel order might indirectly serve as an advertisement of my various enterprises". Brighton's Royal Pavilion fitted the bill perfectly and with his museum attracting 400,000 visitors a year he commissioned Leopold Eidlitz, "to spare neither time nor expense in erecting a comfortable, convenient, and tasteful residence".

The house would take 500-workers two years to build at a cost of $100,000 plus a further $50,000 spent on its equally exotic outbuildings, the land itself, and the landscaping. It was situated on a slight eminence overlooking Long Island Sound, roughly where the Klein Auditorium stands today at the intersection of Fairfield and Iranistan Avenues. Constructed of limestone, it measured 124-feet across and its highest point (the tip of the finial above the central dome) reached up a dizzying 90-feet. Its central square block - crowned by five Mughal domes - stood 3-stories high over a basement and was flanked on either side by a pair of 2-story wings, each crowned by its own Mughal dome.

Onions, Outbuildings, and a Miniature Palace for the Gardener

Both its front and rear facades were entirely fronted by verandahs laced with elegant cusped filigree arches. Dozens of 'grotesques' - in this case laughing Pan-like faces on acanthus leaves - ran around the uppermost ledges of the house beneath its balustrade. One of these is now on display in the Barnum Museum at Bridgeport along with a scale model of Iranistan. The grotesques were hand-carved from wood and covered in a reddish-brown paint mixed with sand to create the very realistic illusion of sandstone.

The bulbous Mughal domes (more generically referred to as "onion domes") as well as the columns resembling minarets were all topped by finials pointing upwards to the heavens. Four more domes crowned the conservatory and further outbuildings included Turkish kiosks, a Chinese pavilion, and a miniature palace as a home for the head gardener.

The house was approached by a semi-circular drive punctuated with urns and a circular fountain was placed in front of the stone steps that led up to the front door. The gardens were laid out with parterres in symmetrical patterns and Barnum kept both gates to the estate open, allowing the public to freely enjoy this truly unique corner of the continent.

“When Entertaining the Public, it is Best to Have an Elephant”...

Behind the house, Barnum planted a flower and fruit garden, but it was in the fields that bordered the New Haven to New York railroad that, every once in a while, the showman enjoyed treating the commuters to the unusual view of a bull elephant tilling his land! The elephant wasn't the only animal found here: roaming the grounds were mandarin ducks, silver pheasants, a cow named Bessie, and a pig named Prince Albert - indicating that perhaps Barnum had not been necessarily charmed by Queen Victoria's husband!

"Love God, and Be Merry"

No pictures of Iranistan's interior survive, but it was written about in abundance: On entering the great hall, an ornate staircase with a balustrade of carved black walnut wound its way up the house past alcoves displaying marble statuary from Florence. The staircase gradually decreased in size before terminating in the observatory housed in the central dome studded with diamond shaped windows. Beneath the observatory was a huge Ottoman Room with a circular Turkish divan large enough for seating 50-people.

Back in the hall, opposite the base of the staircase, a pair of large doors slid back to reveal the Drawing Room, the walls of which were panelled and painted to depict the four seasons under a ceiling of gold Arabesque mouldings. The fireplaces were Italian marble, the furniture was of rich rosewood, and a "gorgeous" Royal Wilton oriental carpet covered the floor. The square Dining Room could comfortably seat 40-guests and was panelled in English oak on which was painted imagery depicting the three fine arts: music, painting, and poetry. The ceiling mouldings were gilded and the furniture was of black walnut and included a cabinet, "of rare and beautiful porcelain, among which is a harlequin dessert-service, every piece of a different pattern, lettered with the initials P.T.B.".

Barnum's study was lined with orange satin wallpaper and was connected to a bathing room with a shower and bathtub from which flowed both hot and cold water. The large library (since recreated in the Barnum Museum) was lined in rich wallpaper depicting Far-Eastern landscapes while tall stained glass windows bathed the room in a mosaic of different colored lights. Reception rooms also included a Billiards Room and a Grand Ballroom with mirrored doors and a highly polished wooden floor into which was inscribed the motto “Love God and be Merry,” words Barnum liked to repeat frequently.

"The Most Gorgeous Display of Earthly Splendor..."

All the furniture was "made expressly for every room in the house," and they often revealed Barnum's taste for, "imaginative human and animal imagery". He made it clear that he had, "no desire even to ascertain the entire cost" of Iranistan, and he was true to his word when he said that he refused to cut any corners. Not only did the house have its own hot and cold water supply, but it was supplied at high pressure. It had a burglar alarm, gas lighting, and was heated with hot air furnaces in winter. Back then, there were few more modern houses in the world, let alone hotels, that could match the comforts of Iranistan, yet for himself, Barnum wrote: "I am never so happy as when I return to my 'homestead' (here) I am at home, in the bosom of my family; and 'home' and 'family' are the highest and most expressive symbols of the kingdom of heaven".

On November 14, 1848, Barnum wrote, "nearly one thousand invited guests, including the poor and the rich, helped us in the old-fashioned custom of, 'housewarming'". Those supposed to have been entertained at Iranistan included the author Mark Twain (who counted Barnum's 1853 autobiography among his favorite books); Founder and Editor of the New York Tribune, Horace Greeley; the Colonel who was famously killed at the Battle of Little Bighorn, George A. Custer; and, the English poet, Matthew Arnold. But, in fact Custer was an unknown 17-year student in Ohio when Iranistan burned, and while Arnold and Greeley did stay with Barnum, they did so at Waldemere in the 1880s. Mark Twain was the only one among them to experience Iranistan, as was John Hooker - husband of suffragist Isabella Beecher and brother-in-law of the novelist Harriet Beecher Stowe - who described it as, "the most gorgeous display of earthly splendor that I ever dreamed of".

The End of the Show

In his efforts to bring prosperity to Bridgeport, Barnum was persuaded in 1855 to relocate the Jerome Clock Company which would have created hundreds of jobs for the town. He agreed to pay off their debts of $100,000, mortgaging Iranistan to do so, but quickly discovered he had been duped and found himself responsible for $500,000 of their debt. Forced to declare himself bankrupt, the doors were closed on Iranistan. His friends and the people of Bridgeport rallied round him, but not everyone was sympathetic: the Chicago Tribune mocked his misfortune with their headline, "The Deceiver is Duped".

Nonetheless, two years later, Barnum's name still remained on the title deed to Iranistan, even if he still couldn't occupy it. At the end of the working day on December 17th, 1857, several builders who'd been carrying out repairs sat down to smoke their pipes. The ashes caught fire and while locals rushed over to save some of the furniture, by 11-o'clock that night Iranistan was no longer. The house was only insured for $30,000 and after being informed of his loss by telegram, Barnum wrote: "My beautiful Iranistan is gone".

There were few men in America, let alone the world, who were more resilient than P.T. Barnum. Homeless and financially ruined, his old friend who he made famous, General Tom Thumb, jumped to his aid and suggested they go on another tour of Europe. That was followed by a lecture tour of the States and by 1859 Barnum not only succeeded in buying back his museum, but had enough left over to build his next mansion, Lindencroft.

By 1887, all that remained of Barnum's first, fantastical home was the water tower - a 60-foot structure of 100,000 bricks and still complete with its "handsome" dome. This last vestige of the "Greatest Showman's" greatest home disappeared for development perhaps fittingly, with a bang and a cloud of dust, as dynamite brought down the final curtains.

Leopold Eidlitz: Architecture and Idealism in the Gilded Age By Kathryn E. Holliday

The Wonders: The Extraordinary Performers Who Transformed the Victorian Age By John Woolf