Built in 1859, for the widowed Madame André Monpelas who together with her husband and Francois-Etienne Violet had established what became one of Paris' best known perfumeries in 1833. Her husband was one of the 200 victims of the coup d'état in 1851, shot dead at home while illuminated in his window. Mme. Monpelas sold the business and built this house with the proceeds which is still also referred to as "L'Hotel Monpelas". Designed by architect Jean-Alexandre Thierry (1810-1890) who had recently completed the Temple Israelite de Paris, it was among the first of the mansions built on Baron Haussmann's newly laid out Avenue Foch stemming off from L'Étoile. Back then, the street was called the Avenue de l'Impératrice, but after 1870 it was known as the Avenue Bois de Boulogne and it was not until 1929 that it became Avenue Foch....
zoom_in 5 images 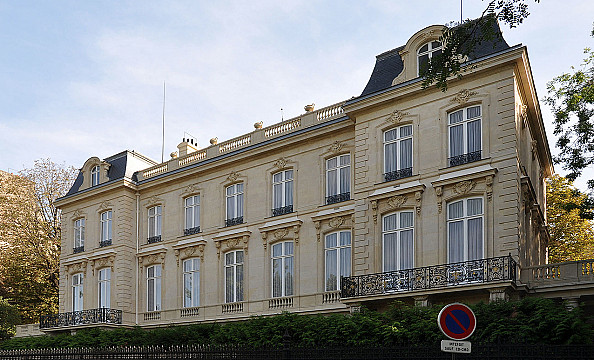 After the death of Madame Monpelas in 1878, it was acquired by the second son of King Louis-Philippe I, Louis-Charles d’Orléans (1814-1896), Duc de Nemours. Having been in exile in England since the Revolution of 1848, the Duke returned to France and lived here alone quietly, having lost his wife (a first cousin of England's Queen Victoria) in 1857.

In the year after the Duke's death (1897), it was purchased by Maurice Ephrussi and his wife Beatrice de Rothschild. Beatrice spent much of her childhood at the sprawling Château de Ferrières and some of the statuary still seen in the gardens here today once adorned its extensive gardens. She divorced her husband in 1904 and these days is best remembered for the home she then built on the Cote d'Azur, the Villa Ephrussi-Rothschild. She died in 1934, leaving her Paris home to her nephew, Édouard de Rothschild, but all of her art collection in all her houses went to the Académie des Beaux-Arts to be put on display for the public at her beloved villa in the south of France.

Édouard de Rothschild had barely moved in before the Nazis swept across France and occupied Paris. He and his wife, Germaine, retreated to the Château de Ferrières but eventually were forced to flee the country in 1940. Their home on the Avenue Foch was one of several to be requisitioned by the Gestapo and the once fashionable enclave became known as the "Avenue Bosch" or "Avenue de la Gestapo". Today, the house is the only surviving example of the houses that once lined the avenue in the architectural style of Napoleon III (Second Empire). It remained in the Rothschild family until 1979. Since then, it has been restored and serves as the official residence of the Ambassador of Angola.

Avenue of Spies: A True Story of Terror, Espionage, and One American Family's Heroic Resistance in Nazi-Occupied Paris By Alex Kershaw

The Paris Wife By Paula McLain

The Nightingale: A Novel By Kristin Hannah