Completed in 1860, for P.T. Barnum (1810-1891) and his first wife Charity Hallett (1808-1873). Situated on Fairfield Avenue between State and Yale Streets, it was only a third of a mile southwest of the burned-out ruins of their first fantastical mansion, Iranistan. But, whereas Barnum had gone out of his way to create a showpiece home unlike no other at Iranistan (in which he more than amply succeeded), in stark contrast he made, "no attempt at ostentation" at Lindencroft - or perhaps more aptly, as little an attempt of ostentation as the world's greatest showman was capable. It was later owned by a Bonanza King who made his millions unearthing gold in Colorado and it's his name that is attached to the elegant high school with which the mansion was replaced....
zoom_in 13 images 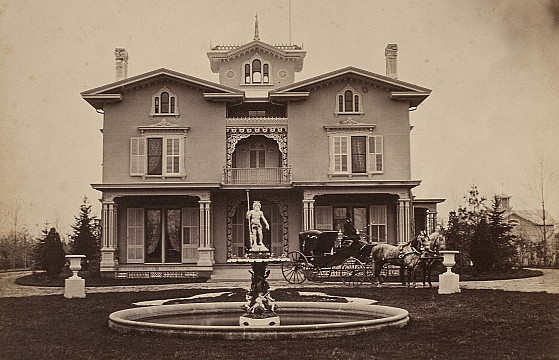 E.C. Bassick, of Bridgeport, Connecticut; Owner of the Bassick Mine, Colorado

Barnum lost his beloved Iranistan to fire in 1857 which came as a particular kick in the teeth because he was already up to his neck in debt having been duped into taking responsibility for half a million dollars of debt while trying to create hundreds of jobs in Bridgeport. But, there were few men in America who were more resilient than P.T. Barnum. Homeless and financially ruined, his old friend who he made famous, General Tom Thumb, jumped to his aid and suggested they go on another tour of Europe. That was followed by a lecture tour of the States and by 1859 Barnum had not only succeeded in buying back his museum in New York City, but had enough left over to build Lindencroft.

"Emphatically a Labor of Love"

Having spent the last few years moving his family between small leased houses and boarding houses, Barnum now endeavored to build something that was, "emphatically a labor of love". Before any structural work could begin it was necessary to cart in several thousand loads of earth to fill in the hollow on which it would stand.

It neighbored the house he'd built for his daughter, Caroline, in 1852 and while it was an altogether different house to Iranistan, there were still a couple of small flourishes that paid tribute to his first house such as the central latticed balcony and the front fountain - if both on a more modest scale. Nonetheless, the house was still large with a 100-foot depth and a central tower offering an unspoilt view over Long Island Sound. It was built in the then fashionable Italianate style by a local contractor, Albert G. Tallmadge, and although the world's greatest showman had restrained himself somewhat this time around, still, "all that taste and money could do was fairly lavished on Lindencroft".

In the house that Barnum described as "elegance, pure and simple," from basement to attic, he gathered, "my library, my pictures, my souvenirs of travel in other lands, and assembled my household 'gods'". It stood on 6-acres of grounds with a, "broad, beautiful lawn... adorned with statuary, shrubbery and fountains". Mrs Barnum was responsible for the laying out, "the walks, the arbors, the lawns, the garden, the piled-up rocks even, the profusion of trees and shrubbery, and the wealth of rare and beautiful flowers".

When it came to naming their new house the Barnums were helped by their old friend, the celebrated poet Bayard Taylor, who only the year before had finished building a Gothic-Revival mansion in Pennsylvania that he named Cedarcroft. As the Barnum's new home also stood on an enclosed parcel of land (traditionally referred to in Scotland as a 'croft') rich with linden trees (as opposed to cedars), they named it "Lindencroft".

Barnum was an outspoken supporter of Abraham Lincoln, and someone who enjoyed a practical joke. In the run-up to the 1860 Presidential election, Lincoln's younger supporters started "Wide-Awake" associations and took to marching with torches. One such group announced that they would be coming to march outside Barnum's house and to show that he was behind them Barnum bought "two boxes of sperm candles, and prepared for a general illumination of every window in the front of my house".

To admire the spectacle, Barnum invited several of his neighbors over irrespective of their politics. Among them was an outspoken Democrat identified only as "Mr T.". To send a clear message as to where his politics lay, before joining the party, Mr T. ordered his servants to remain in the basement under strict instruction that not a flicker of light was to be seen coming from the house. Barnum could not resist playing a joke on his serious-minded neighbor and recruiting the help of two further Democrats, one diverted the attention of Mr and Mrs T. at the party while the other went over to his house with Barnum and lit up every window as though the T's were Lincoln's heartiest supporters!

As the "Wide-Awakes" arrived at Barnum's they found the T. house equally ablaze with light and immediately concluded that Mr T. had become a convert to the cause, letting out three loud cheers to him. When Mr T. saw why he was being hailed with such affection by his political foe he uttered "a single profane ejaculation" and ran home to extinguish every last candle. But, the unfortunate Mr T. was not in time for the Wide-Awakers to leave without thinking that they had successfully added a new recruit to their ranks!

As at Iranistan, Lindencroft was fitted out with a state-of-the-art magnetic burglar alarm. In the early hours of one morning, the peace was broken when its shrill bell sounded and not only Lindencroft, but the whole neignborhood erupted like a hive of angry hornets:

"I (Barnum) was instantly on my feet and summoning my servants, one ran and rung the large bell on the lawn which served in the day time to call my coachman from the stable, another turned on the gas, while I fired a gun out of the window and I then went to the top of the house and set off several rockets. The whole region round about was instantly aroused; dogs barked, neighbors half-dressed, but armed, flocked over to my grounds, every time a rocket went up, and I was by no means sparing of my supply; the whole place was as light as day, and in the general glare and confusion we caught sight of two retreating burglars, one running one way, the other another way, and both as fast as their legs could carry them; nor do I believe that the panic-stricken would-be plunderers stopped running till they reached New York". And I should think he was probably right!
"Sacrificed to the Claims of Health"

It was in the Drawing Room at Lindencroft that General Tom Thumb became engaged to Lavinia Warren - and by way of an extra wedding present, Barnum sold 5,000-tickets to their reception the following year for no less than $75 each. Other fond memories were recalled such as, "delightful sails, dinners, and clam-bakes at Charles Island". But, through all this, Mrs Barnum's health continued to deteriorate and no large parties were hosted.

Despite their original intention that Lindencroft would be their final home, by the summer of 1867 Mrs Barnum no longer felt able to manage the house and its gardens. Her doctors recommended that a move to the seashore would be beneficial for her health and this gave rise to Waldemere. Consequently, Lindencroft was sold on July 1st, 1867. Barnum reflected: "It was hard indeed to tear ourselves from this fascinating spot, but there are times when even the charms of home must be sacrificed to the claims of health".

It's not immediately clear to whom Barnum sold Lindencroft, but by sometime in the 1890s it had come into the possession of Edmund Chase Bassick (1833-1898) and his wife, Rebecca. According to legend in Connecticut, it was Bassick's pot luck discovery of the first gold field in Australia that single-handedly triggered the Gold Rush of 1851. While there were several Gold Rushes in Australia that year, none of them were triggered by Bassick. However, he did win - and then lost - a fortune in gold before returning to the States. He may have come back empty-handed, but he'd gained invaluable knowledge.

Back on American soil, Bassick headed for Custer County in Colorado where he lived hand-to-mouth with his family in a single-room log cabin. Connecticut legend has it that in 1877 he found, "the largest gold mine ever discovered in America". It wasn't the largest gold mine ever discovered in America, but within just 18-months the Bassick Mine had extracted silver and gold to the value of $500,000. It was purchased by a syndicate from New York and Bassick, now a millionaire, became a director of the company and moved to Chicago. In 1880, he settled in bucolic Bridgeport, first buying the old Sherwood place at Hancock and Fairfield before purchasing Lindencroft that he renamed "Miner's Rest".

Bassick was a tough businessman, but he never forgot what it was like to struggle and just as he was quick to generously reward anyone who had ever showed him or any of his family charity, he was equally quick to quash anyone who had not. At Bridgeport, he is still remembered for building a development named Bassickville. He rented the model cottages predominantly to tradesman at below market value and rumor has it that he personally donned his work clothes to help landscape each of the houses.

At Miner's Rest, Bassick made improvements to the house and added further greenhouses while laying out new gardens to sate his appetite for horticulture. He died in 1898 and his widow remained here until her death in 1920. Their eldest son, Edgar Webb Bassick (1872-1946), President of the Bassick Manufacturing Company and one of the largest employers in Bridgeport, lived here until 1924 but by then industry had encroached upon Fairfield Avenue and not wishing to see the family home stripped of its dignity he donated the land to the city to best serve the community that had been so welcoming to his family.

Edgar's father had long advocated a policy of helping those who helped themselves and so it seemed fitting to replace the house with a community school. Miner's Rest was razed in 1924 and in the same year (1928) that Edgar moved to The Oaks at Fairfield, he commissioned Ernest G. Southey to build a Neo-Classical masterpiece that has made the Bassick High School undoubtedly one of the most beautiful high school in America.

The Bassick High School opened its doors in 1930 and has been a landmark in Bridgeport ever since, but has recently come under threat. School board member Maria Pereira has advocated maintaining the original building as created by Edgar Bassick and Ernest Southey while overhauling later additions. Click here to show your support.

Bridgeport: Tales from the Park City By Eric D. Lehman

The World's Most Haunted House: The True Story of The Bridgeport Poltergeist on Lindley Street By William J. Hall