Completed in 1809, for Colonel John Lincklaen (1778-1842), founder of the village of Cazenovia, New York, and his wife Helen Ledyard (1777-1847). Having no children of their own, they adopted Helen's baby brother, Jonathan Denise Ledyard (1793-1874) who became their sole heir and changed his name to Ledyard Lincklaen. He had one daughter, Helen, who duly inherited the house and lived there with her husband Charles S. Fairchild (1842-1924), Attorney General of the State of New York and U.S. Secretary of the Treasury under President Grover Cleveland....
zoom_in 9 images 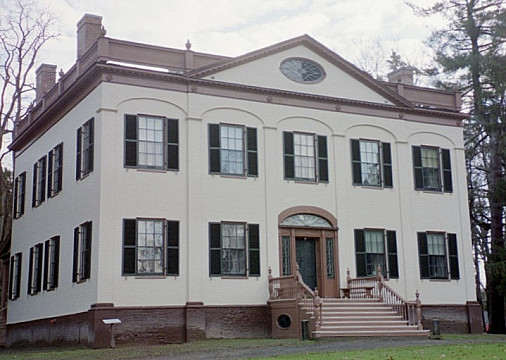 When Mrs Fairchild died in 1931, she willed the property to her cousin, Mrs Eliphalet (Ledyard) Remington, who lived here until her death in 1953. Mrs Remington's brother, George S. Ledyard, and his son, John Ledyard, were the last of the family to call it 'home'. In 1968, it became the Lorenzo State Historic Site and is now a house museum.

Unknown Museums of Upstate New York: A Guide to 50 Treasures By Chuck D'Imperio