First established in 1882, by R. Kinton Stevens and his wife, Caroline Lucy Tallant, who laid out a lemon and palm nursery here which they named "Tanglewood". In 1916, this was purchased by a wealthy New Yorker, Erastus Palmer Gavit, who renamed it "Cuesta Linda" and aside from building the main residence - designed by Reginald Johnson in 1919 - the Gavit family began to landscape the grounds. In 1941, it was purchased by one of the most colorful characters from America's Gilded Age, Ganna Walska, and her sixth husband (who was twenty years her junior), the Yoga & Buddhist scholar Theos Bernard, nephew of "Oom the Omnipotent". They renamed it "Lotusland" but were divorced after just four years of marriage. Ganna remained here for the next 40-years, creating the magnificent mediterranean-style gardens enjoyed by so many today....
zoom_in 11 images 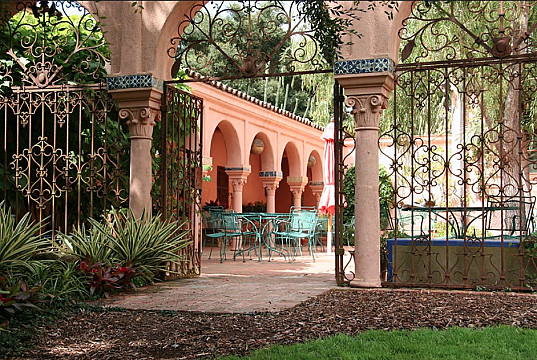 Theos Bernard, of Lotusland; Scholar of Yoga and Buddhism

Dreamscapes: Inspiration and Beauty in Gardens Near and Far By Claire Takacs

Private Gardens of Santa Barbara: The Art of Outdoor Living By Margie Grace