Built in 1893, for the celebrated Anglo-Indian novelist Rudyard Kipling (1865-1936) and his American wife, Caroline Starr Balestier (1862-1939). The name they gave their home was the word for the amount that a house would typically cost to build in India (nine lakhs) which was also the name of a book on which Rudyard had collaborated with his great friend, Carrie's brother, Wolcott who'd died in 1891....
zoom_in 2 images 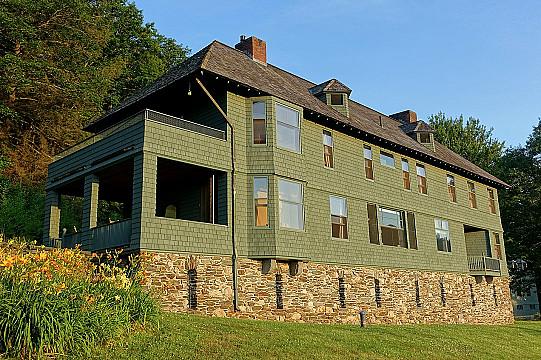 It was designed by Henry Rutgers Marshall (1852-1927) with significant input from Kipling himself, and built by a French-Canadian, Jean Pigeon. In 1894, they welcomed Sir Arthur Conan Doyle (the creator of Sherlock Holmes) as a house guest. However, the Kiplings were not destined to remain here long: a very public falling out with another of Carrie's brothers, Beatty, followed by the death of their daughter, Josephine, saw the family relocate to England where they lived at Batemans in East Sussex.

During the 20th century, Naulakha was associated with the Holbrooks who sold it to the Landmark Trust in 1992. Today, Naulakha (also referred to as the Rudyard Kipling House) has been renovated back to how it was in Kipling's time and is available to hire.

If: The Untold Story of Kipling's American Years By Christopher Benfey

Rudyard Kipling in Vermont: Birthplace of The Jungle Books By Stuart Murray