Completed 1838, for Louis-Tancrède Bouthillier (1796-1881) and his wife Françoise-Geneviève (1807-1885), daughter of Benjamin Trottier Desrivières Beaubien (1776-1834). The house - the third oldest in the area - still stands today and is also referred to as "Maison Louis-Tancrède Bouthillier" or "La Ferme Outre-Mont". The property gave its name to the village that subsequently became the Borough of Outremont when it merged with Montreal in 2002. The house remains a private residence....
zoom_in 3 images 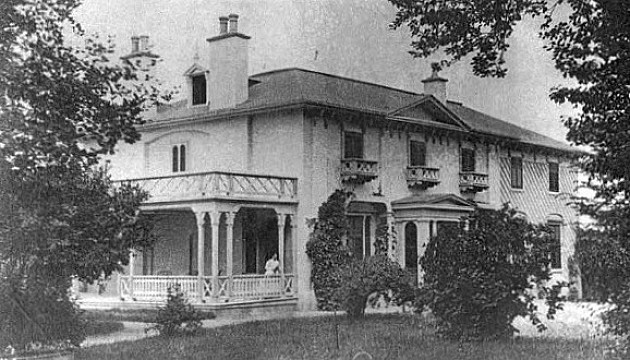 In 1832, Bouthillier used his inheritance to buy several town lots in and around Montreal, including a farm at Côte Sainte-Catherine. The following year, he began to build a large, two-story brick house over a basement for his family in the style of the period. He named the property "Outre-Mont" meaning, "other side of the mountain," as the property was on the opposite (north) side of Mount Royal from the City of Montreal.

In 1856, Bouthillier was Collector of Customs at the Port of Montreal and in order to be closer to his official duties he moved his family back into the city, living at his late father-in-law's mansion, the impressive Maison Beaubien. That year, he leased Outremont to D. Lorn MacDougall, the first Chairman of the Montreal Stock Exchange and founding partner of MacDougall, MacDougall & MacTier (familiarly known today as "the 3Macs"). Lorn MacDougall was a passionate horseman and having been Master of the Montreal Hunt since 1854, a country estate such as Outremont would also serve the club well.

Lorn was the eldest sibling in a large family. He lived here with his wife, Harriet Lucy Boston, but also settled his father and four of his much younger half-siblings on the estate too. Another of his brothers (Hanbury) built a summer house nearby.

Horticultural School for the Deaf

In 1862, Bouthillier had purchased his wife's uncle's debt-ridden home, the Manoir Sabrevois de Bleury, and it was probably at about the same time that he sold Outremont  to the MacDougalls. In 1875, the MacDougall estate gave its name to the newly created Village of Outremont. Lorn MacDougall died in 1887 and his heirs sold the estate to the Clerics of Saint-Viateur who transformed it into an horticultural school for the deaf. The clerics and students lived in the main house and the drawing room was converted into a chapel which from 1889 became an informal place of worship for Catholics in the area.

In 1904, the house once again became a private family home and three years later a further three houses were built close by. In 1910, the publisher Henri Bourassa (1868-1952) had leased the house as his home - in the same year that he founded Le Devoir. Its history since then is somewhat obscure, but the house still exists and the MacDougalls are remembered by the street name on which the white stuccoed old mansion still stands. If you know anything more about its history, log in, and please leave a comment.

A People's History of Quebec By Jacques Lacoursière & Robin Philpot