Built in 1910, for L. Frank Baum (1856-1935) and his wife, Maud Gage (1862-1953). Situated on Cherokee Avenue on the corner of Yucca Street, a block north of Hollywood Boulevard, this was the dream home of the man who brought us The Wizard of Oz plus some fifty further titles. He lived here with his wife to whom he was devoted and their Cocker Spaniel, 'Toto'. He named it after the fantastical world he created, taken from the O-Z drawer of his filing cabinet. He died here in 1935 and his widow remained on in their house, but it was demolished shortly after her death in 1953....
zoom_in 1 images 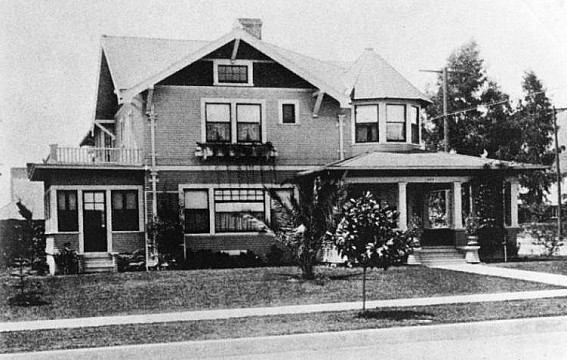 Frank Baum had showed a natural flair for writing and storytelling since childhood. He started his career as a stage actor with limited success before opening a store called "Baum's Bazaar" in South Dakota which went bankrupt. He took a job as an editor with the local paper which failed in 1891 and he moved with his family to Chicago where he continued to write for the press and ran a magazine. He wrote his first children's book in 1897 and began making up fantastical stories to tell to his young sons, and sometimes their friends. On one such occasion in his study, one of the children asked the name of the magical land which he was describing. Casting his eyes around the room they fell on the drawer of his filing cabinet labeled "O-Z." In 1900 he published five books, one of which was “The Wonderful Wizard of Oz” and it was an instant hit, making him a celebrity.

His success didn't stop his creativity and over the next two decades he wrote a further fifty odd books, thirteen of which were Oz sequels. Having had favorable results taking Oz on stage, in 1909 he ventured into film but this landed him in debt and triggered a heart problem which had first surfaced when he was a boy. For the benefit of his health and to be closer to his eldest son, Frank, he and his beloved Maud moved to Hollywood where Maud dipped into her inheritance to buy the land on which they could build a comfortable home which he named "Ozcot" - 'cot' meaning 'small house' in old English.

The Wizard at Home

Despite the royalties from his books, Baum's finances remained precarious as he went into film production. He expressed his gratitude to his beloved wife (a Cornell graduate who took up sewing to help bring in money) by creating the "yard of Maud"at Ozcot - a wall he covered in all his favorite pictures of her since they were married back in 1882.

Ozcot was unpretentious but comfortable and had room for a maid's quarters. Baum worked in the large, well-furnished library, and there was an equally large fireplace and sunroom for the summer. He personally designed and installed the lighting in the Dining Room: a copper frame backed with emerald green glass that threw a green patterned light over the room when lit. The piano was fitted with rolls from several of the Oz musicals.

The Garden of Oz

The drive to Ozcot was lined with large magnolia trees and there was a palm tree and  pomegranate tree in the front yard - Maud made pomegranate jelly from its fruit. Baum took a huge pride in his garden, where he often wrote, and his dahlias and chrysanthemums saw him win several local horticultural prizes. He'd been interested in raising fancy poultry from a young age and at Ozcot he was once again able to indulge his passion. Aside from a goldfish pond and archery range, he built an aviary twelve feet in diameter in which he kept 40-varieties of birds selected for their songs and the colors of their plumage. They would sit on his hands and shoulders, and even ate from his mouth.

“Now We Can Cross the Shifting Sands”

Baum's death was attributed to his weak heart and the stress of his failing production company. He suffered a fatal stroke at Ozcot on May 6th, 1919. In a brief moment of lucidity before he died he looked at his beloved wife and uttered a line from his most famous book: “Now we can cross the Shifting Sands”. After his death, Maud converted the sunroom into a bedroom for herself and converted the second story into an apartment that she rented out. However, she and her sons all lived to see the success of the famous 1939 Wizard of Oz movie starring Judy Garland which netted them a well-needed $40,000 and finally Maud could enjoy financial security. She stayed on at Ozcot until her death here on March 6th, 1953, aged 91. Sadly the house did not survive the decade and it was replaced by the decidedly unmagical block that has taken its place today.

The Real Wizard of Oz: The Life and Times of L. Frank Baum By Rebecca Loncraine

The Wizard of Oz By (Starring) Judy Garland