Completed in 1914 for Henry Lewis Pittock (1835-1919) and his wife Georgiana Martin Burton (1843-1918). Set within 46-acres in the West Hills, it enjoys a spectacular panoramic view over Portland and across to Mount Hood from its vantage point a thousand feet above downtown. It was the first substantial mansion to be built in the Portland area, marking Portland’s transformation from town to thriving city.
zoom_in 2 images 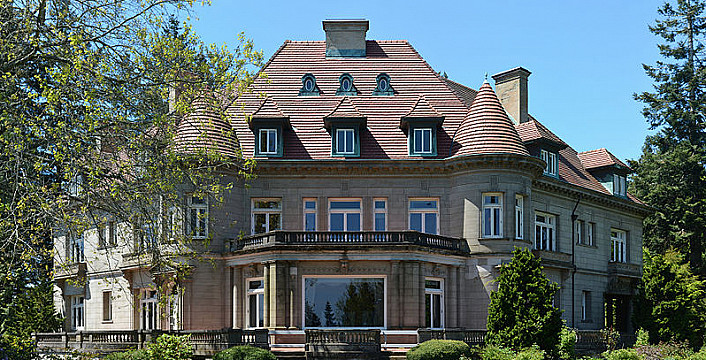 The Pittocks were devoted to Portland and constructed the house of Tenino Sandstone, using only craftsmen and artisans from Oregon to sculpt their home. The 22-room mansion, filled with 18th and 19th century antiques, took five years to build, resembling a chateau in the French renaissance-style.

The interior is mainly Edwardian in style, but there is also a Turkish smoking-room, an oak-carved library in the English Jacobean-style and a grand sweeping staircase redolent of L’Opera in Paris. The house features what was then cutting-edge technology such as a central vacuuming system, thermostats in every room, multiple showerheads in the baths, intercoms and indirect lighting. Recently renovated are the kitchen and pantry, that boasts a walk-in freezer. The outbuildings include a three-car garage, a greenhouse and a gate lodge designed in the Italianate style that served as a servant’s residence.

The grounds constitute vast fragrant gardens that blossom with rhododendrons and flowering cherries, as well as incorporating miles of hiking trails with breathtaking views over the city. Pittock Acres Park, as the grounds are known today, is renowned to be one of the best places to bird-watch in Portland.

The house remained in the Pittock family until 1958 when Eric Ladd (d.2000) with Henry and Georgiana’s grandson Peter Gantenbein (1914-1984) unsuccessfully put the estate up for sale. Land developers hungrily eyed the estate, and following the extensive damage it received during the Columbus Day Storm of 1962 the owners seriously considered demolishing it.

Having watched members of the community collect $75,000 in just three months, the City of Portland recognised both the mansion's popularity and it’s historical importance, purchasing it for $225,000 in 1964. By the following year the estate was opened to the public and it remains an important community landmark to this day, though still in desperate need of further work to preserve it for prosperity.