Built 1838, for The Hon. Thomas McKay (1792-1855) and his wife, Ann Crichton (d.1878). McKay is considered to be one of the founders of Ottawa and from 1867 his former home became the vice-regal seat of the Governors-General of Canada and the Canadian monarch. Also referred to as "Government House" the 175-room and 102,000 square foot structure is open to the public throughout the year....
zoom_in 5 images 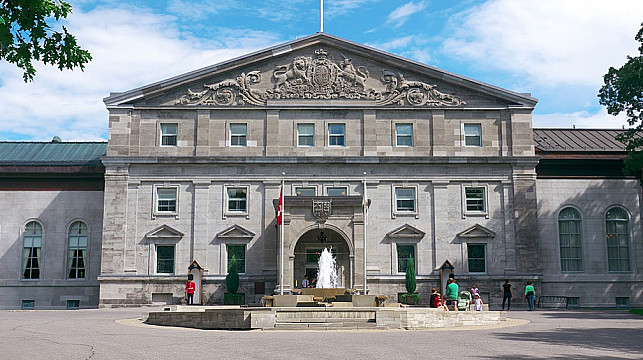 McKay was a stone mason who came from Scotland to Montreal in 1817 and formed a partnership with John Redpath (1796-1869). In 1826, having successfully completed the Lachine Canal, Lt.-Colonel John By (1779-1836) contracted their firm to build the Rideau Canal. McKay saw promise in the area and stayed. He purchased 1,100-acres between the Ottawa and Rideau Rivers and laid out a town that he called New Edinburgh. Having served on Bytown’s city council, he became a Member of the Legislative Assembly in 1834.
In 1838, McKay put aside 65-acres of his estate on which he constructed a bow-fronted neo-classical villa - completely indiscernible and lost somewhere inside today’s structure.

McKay took inspiration for his new home from Chilton Lodge in England, designed by Sir John Soane (1753-1837) and which featured in his 1793 handbook, Cottages and Villas. The original house contained just 11-rooms, but two (the dining room and directly above it, the drawing room) were large, beautiful oval-shaped rooms of “great elegance”.
The area had nothing that compared with it and his stone villa became known locally as McKay’s Castle and is also referred to as McKay’s Villa but it was McKay who named his home "Rideau Hall" after the canal he built that was the source of his wealth. The original, comparatively small, square, structure was fronted by a full height, two-story central curved bay and topped by an ornate curved pediment in typical Georgian style. Aside from the rooms expected in any gentleman’s residence of the period, McKay also built a drafting room from which he continued to design and develop New Edinburgh.
In 1864, Bytown was chosen as the new capital of a united Canada for its proximity between Montreal and Toronto. Renamed Ottawa, Parliament along with the entire Canadian political entourage was shifted from the elegance of Quebec City to what was then still considered an undeveloped lumber town. McKay’s Rideau Hall was the only house worthy of consideration as a vice-regal home for the Governor-General. To that end, it was leased by the Crown from the now widowed Mrs McKay for $4,000 per annum as a temporary arrangement until a suitably grand residence could be constructed.
In 1865, Mrs McKay purchased Rockcliffe Manor House - afterwards the home of her distinguished son-in-law, Thomas Coltrin Keefer (1821-1915). Keefer was then resident at Earnscliffe that was originally built for his second wife. When it became increasingly clear that a new and magnificent vice-regal residence was not forthcoming, it was Keefer on his mother-in-law’s behalf who arranged the sale of Rideau to the government in 1868
The oval dining and drawing rooms are all that remain of the McKay villa within what is today a 175-room structure. What was McKay’s Drawing Room with its original thistle-moulded plasterwork and marble fireplace is today the Queen’s bedroom when she is in residence. Only 5,400 of the total 102,000-square feet that makes up the modern-day Rideau Hall is used for private living quarters.
Prior to the arrival of Charles Stanley Monck (1819-1894), 4th Viscount Monck, the first Governor-General resident at Ottawa, a long two-story east wing was attached to the villa and decorated in the then-fashionable style of the Second Empire. The flamboyant and sociable Lord and Lady Dufferin made two further additions in the 1870s - flanking the central block with the ‘tent room’ to the left and a ballroom to the right. Lord Dufferin also built an ice-skating rink, curling rink and toboggan slide in the grounds. The more practically-minded Lord and Lady Minto added a rear extension containing further bedrooms and offices.
The most formative change came in 1913 when the Connaught’s contracted local architect David Ewart (1841-1921) to overlay the existing façade with the present formal, heavy stone front emblazoned with the Royal coat-of-arms. At the same time, a new long, formal reception hall was built and a further long drawing room behind the Dufferin’s “tent room”. Unfortunately, as Sandra Gwyn put it,

No doubt because he was designing for Royalty - the Duke of Connaught was Queen Victoria’s son - Ewart was overawed by the challenge. His work destroyed the last vestiges of Rideau Hall’s original grace. The pity is that when working on a smaller scale, he was capable of charm and inventiveness.

In 1977, Rideau Hall was designated a National Historic Site of Canada. It is open to the public for guided tours throughout the year and attracts roughly 200,000 visitors annually. The building and its 88-acres of grounds play host to a whole variety of activities and events for the benefit of the Canadian people.

Top 160 Unusual Things to See in Ontario By Ron Brown

Lumber Kings and Shantymen: Logging and Lumbering in the Ottawa Valley By David Lee