Completed in 1823 for King George IV (1762-1830). Its distinctive Indo-Islamic style became popular in the British Raj and was executed here by John Nash with whom George had first collaborated on Buckingham Palace. The core of the pavilion dates back to 1787 when George first commissioned Henry Holland to extend what was originally a farmhouse around a rotunda. Still in the Neo-Classical style, it was extended again between 1800 and 1801, but it was John Nash who gave it its present appearance from 1815. When the "Greatest Showman" P.T. Barnum first set eyes on the Pavilion in 1845, he had plans drawn up before he returned home to the United States and completed Iranistan in 1848 which was directly inspired by the Pavilion and was the first instance of Indo-Islamic architecture on the North American continent....
zoom_in 1 images 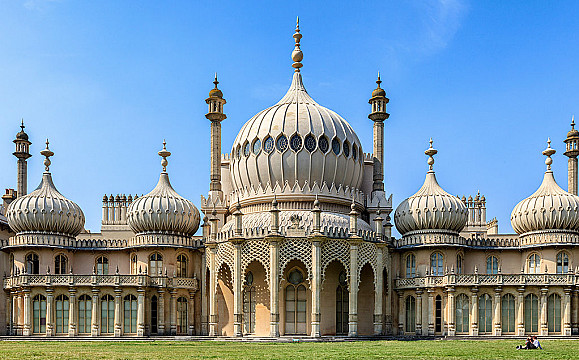 Prince Albert of Saxe-Coburg & Gotha, Consort of the British Monarch

George IV died in 1830 and he was succeeded by his brother, William IV, who continued to use the Pavilion on his visits to Brighton. But, his niece, Queen Victoria, was not so enamoured with Brighton nor the Pavilion, particularly after the seaside resort became accessible to the masses from London by rail. She began building Osborne House on the Isle of Wight from 1846 and in 1850 she sold the Pavilion to the town of Brighton for £53,000 for use as their assembly rooms. As part of the condition of the sale, much of the original furniture, fixtures and fittings were removed to either Buckingham Palace or Windsor Castle. But from the 1860s, the Royal Family returned and permanently loaned large quantities of what had been removed and coupled with an extensive restoration project, the Pavilion is now an accurate representation of how it appeared in the 1820s.

The Making of the Royal Pavilion, Brighton: Design and Drawings By John Morley