Built in 1818, for John Torrance (1786-1870) and his wife Elizabeth Fisher (1794-1862). Described by contemporary accounts as, "a handsome residence," built in the Palladian style on, "a grand and sprawling estate," this 42-room hewn-stone mansion sat amidst gardens that were the envy of its neighbours. It was situated in the fashionable Côte-Saint-Antoine, just above the Côte-à-Baron....
zoom_in 3 images 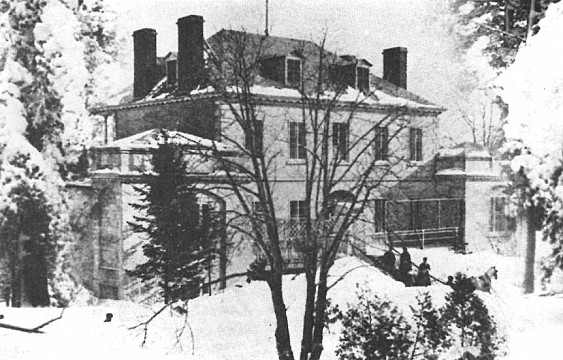 Aside from being one of Montreal's original entrepreneurs with significant interests in tea, banking, steamboats and railroads, Torrance's principal pastime was gardening and in 1849 he was a co-founder of the Horticultural Society of Montreal. It is therefore perhaps of no great surprise that his home - approached by a wide carriageway - was known for its acres of landscaped gardens, vineries, orchards and conservatories. The house was also famous for the high-brick walls which surrounded it and according to family tradition the "magnificent wrought-iron gates" to the estate were firmly closed at 10pm every night.

In 1853, Clara Fitzroy Kelly (1826-1869) visited St. Antoine Hall from England, describing the "most beautiful and wonderful garden" and stating that Torrance had, "collected here everything which is rich and rare, in shrub or flower". Torrance's grand-daughter, Evelyn Cartier (Galt) Springett (1865-1950), also remembered it as "a lovely place (with) great shady trees, and in summer the horse chestnuts were alive with humming birds".

In today's terms, St. Antoine Hall stood near the Centre Bell in what is now downtown Montreal, but all that remains as a reminder of this once much-loved family home is the street named for the family - Rue Torrance. Its precise fate is unknown but by 1892 it had lost the battle to urbanisation and was swallowed up by development.