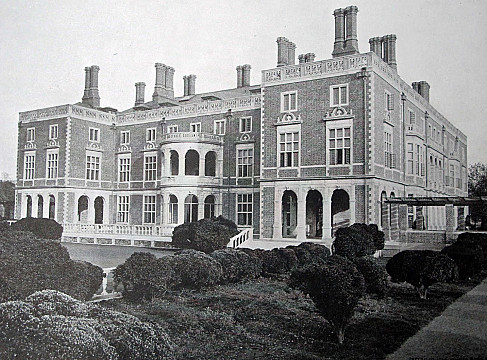 Pratt's fortune was acquired through oil - his father founded Astral Oil which was later absorbed into Standard Oil. In turn, Herbert Pratt eventually became President of Standard Oil, making him one of the richest men in America.

The land - an estate known as Dosoris Park - on which The Braes was built was originally acquired in the late 19th century by Pratt's father. Herbert and eight of his siblings all built houses here, but The Braes was the largest. Both versions of the house (Colonial and Jacobean) were designed by the architectural firm of Brite & Bacon.

Pratt was an avid collector of portraiture. The dining room at The Braes dates from 1611 and was shipped over from England and reassembled within the mansion in 1913. It was salvaged from Rotherwas Court in Herefordshire which was then being demolished. In his will, Pratt instructed that the paneling and mantelpiece be given to his alma mater, Amherst College, where in 1949 it was again reassembled and can still be seen at the Mead Art Museum at Amherst.

During Prohibition (1930), Pratt was fined $16,000 for having 240 cases of champagne (valued at $25,000) smuggled across the border to The Braes. Adding insult to injury, he had to turn over the champagne to the government too!

Since 1947 (two years after Pratt's death), The Braes has housed the Webb Institute of Naval Architecture.