Built 1867, for George Porterfield Gates (1835-1918), the maternal grandfather of First Lady Bess Truman (1885-1982). Located in the Harry S. Truman Historic District, the house is run by the National Park Service and is perhaps more popularly known as the Harry S. Truman National Historic Site. This was the Summer White House of Harry S. Truman (1884-1972), 33rd President of the United States. He was married here in 1919 and from 1953 he retired here, living here until his death in 1972.
zoom_in 2 images 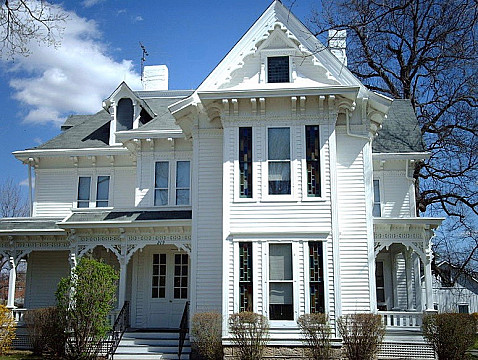 Towards the end of his life, George Gates took his eldest daughter, Madge, back into the family home after her husband, David Willock Wallace (1860-1903), took his own life. After George died in 1918 and Madge continued to live in the house with her four children. The following year, her eldest daughter, Elizabeth Virginia Wallace (1885-1982), better known as "Bess" married Harry S. Truman (1884-1972), who was to become the 33rd President of the United States. The young couple took up residence with Mrs Truman's mother and grandmother and on Truman's election in 1945, he declared that he would be using their home in Independence as his Summer White House.

The house remains largely unchanged since it's construction. The two main floors are topped by a third within the mansard roof with dormer windows and it is surrounded by a large porch. There are 16 high-ceilinged rooms and several Victorian fireplaces, with walnut and mahogany furniture dating predominantly from the Civil War era. A large lawn spreads in front of the house that is surrounded by tall oaks and maples with lilac bushes and other shrubs hugging around the porch. The carriage-house of hand-hewn walnut timbers was later converted into a barn.

From his retirement in 1953 up until the opening of the Truman Library, the house served as the book-loving Truman's personal office. Both he and Bess lived there until their death. Bess outlived her husband and died there in 1982 when she left their home to the National Park Service with the proviso that their daughter (who was born in the house), the authoress Margaret Truman (1924-2008), was allowed to maintain residency on the second floor that was to remain private.

The second floor remains closed today in order to best preserve the house, though a photo tour of the closed rooms, including Harry and Bess's bedroom, is available. The house is now located in the Harry S. Truman Historic District, a National Historic Landmark District. The home has recently undergone a million dollar renovation to bring it up to safety standards and is open to the public.