Built in 1842, for Victor M. Flournoy (1808-1866) and his wife, Elizabeth Lewis Johnson (1813-1875). It was resurrected over the foundations of the original Walnut Hall that was lost to fire. The original was so named by Victor's father, Major Matthew Flourney (1776-1832), for the black walnut felled on the property with which the interior was panelled. As a matter of note, Victor's sister was the mother of the celebrated, sassy and scandalous Sallie Ward. In 1879, the Flournoy family sold it to Major John S. Clark, a popular member of the Jockey Club known as "Uncle Johnnie" who ran the hall as a thoroughbred stud farm. In 1884, it changed hands again when purchased by the Austrian engineer who built High Bridge, Rudolph Wieser, and his "beautiful" wife, Mary Simpson Lusk. But, it was from 1892 that it gained both national and international notoriety as a standardbred horse farm having been acquired that year by Lamon V. Harkness, the eldest son of one of Rockefeller's original partners in Standard Oil....
zoom_in 1 images 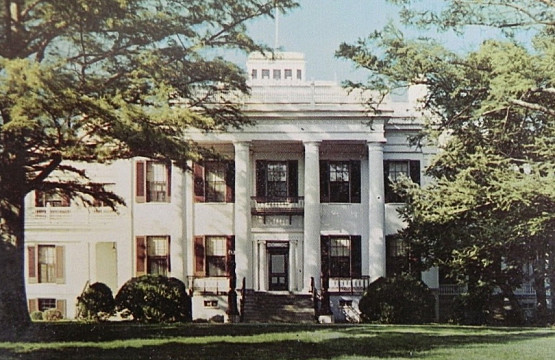 In 1892, Harkness had travelled from Connecticut to Kentucky to buy some carriage horses and by the time he left he was also the new owner of Walnut Hall. He owned several properties but made this one in Kentucky his home, the farm being his favorite project. He enlarged the mansion by adding the wings either side, the roof balustrade, and the belvedere. He grew the farm from 400-acres to 5,000-acres, growing crops too, and having started with 12-horses when he died there numbered 1,400. Under him Walnut Hall Farm became one of the best-known Standardbred horse farms in the world, and some of his best known runners included Moko, Walnut Hall, Fereno and The Harvester.

Harkness' son, Harry, was obsessed by cars and aeroplanes, but both his daughters inherited his passion for horses. His younger daughter, Myrtle, was married to A. Kingsley Macomber and their passion for thoroughbreds saw them move to France from about 1918. Before Harry fell victim to the flu pandemic in 1919, Lamon's elder daughter, Lela, bought out her siblings and took possession of the farm with her husband, Ogden M. Edwards. Under their stewardship, it continued to maintain its reputation for excellence.

Lela Edwards died in 1946, and although the estate has been divided between her descendants, the land and Walnut Hall itself continues to remain in the hands of her descendants today - notably, more often than not, through the female line. It is one of the oldest stock farms in the country to be continuously operated by the same family.

Lexington: Queen of the Bluegrass By Randolph Hollingsworth