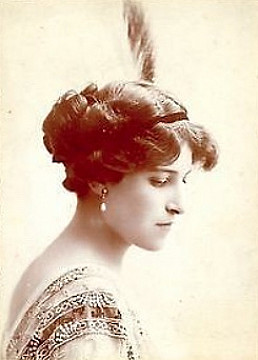 She was born in New York and after being presented to society in 1906 came to England with her mother and stepfather, Harry Higgins, a Director of the Covent Garden Opera House. Her elder sister, Eloise, became the Countess of Ancaster and they were two of the nieces of Ohio's own Prussian Princess of Lynar. On October 10, 1907, Annie married Alastair, the younger brother of the 8th Duke of Roxburghe, becoming the sister-in-law of another American heiress, Mary Goelet. The New York World stressed, "Lord Alastair is by no means wealthy and his is absolutely a love match".

Their wedding took place at St. George's, Hanover Square, in London, and 1,000 invitations were sent out. She entered the church on the arm of her stepfather, followed by four bridesmaids: Lady Evelyn Innes-Ker, Miss Jean Reid (afterwards Lady Ward), Miss Post of New York, and Miss Brenda Wodehouse. The flower girls were Lady Joan Capell, Miss Millicent Orr-Ewing, and Miss Angela Villiers. The reception was held at Annie's mother's and stepfather's home, 1 Upper Berkeley Street. Gifts (valued at $100,000) included a sapphire pendant from the Connaughts; a pink enamel and gold parasol; a gold box, from Prince and Princess Alexander of Teck; a diamond tiara from Mrs Higgins; and, a diamond necklace from Annie's aunt, Mrs Thompson, etc. They honeymooned in Paris.

Their wedding was described in Truth: "Smart brides now wear their veils thrown back from their faces when coming down the church after the ceremony. Miss Anne Breese followed this new fashion on Thursday... Dear old St. George's was decorated with quantities of white flowers, as is usual when the bride is American. The chancel presented an exquisite appearance. The Duke and Duchess of Connaught were present, with Princess Patricia, who looked very pretty in pale blue. The aisle was lined by trooper's of the bridegroom's regiment, the Royal Horse Guards Blue. The bride's good looks were enhanced by her graceful gown of soft satin relieved with pearl embroideries on the bodice. Miss Jean Reid, daughter of the American Ambassador, was one of the bridesmaids. Their pale peach-coloured satin gowns were lightly trimmed with sable, as were their granny muffs made of the material of the gowns. Their large hats were trimmed with shaded pale mauve roses and long floating veils. The children bridesmaids wore little Dutch bonnets. The Duchess of Marlborough was present, looking extremely well in a lovely gown of blue velvet in a soft, bright tone, the skirt in satin to match trellised over with velvet. The Duchess of Roxburghe was in pale blue, a soft and becoming shade, with feathers to match in her hat. She had a string of glorious pearls around her neck".

Because it was ten years before the Duke and Duchess finally produced a son and heir, Anna had got rather used to the idea that if not her husband, then her son would become the 9th Duke of Roxburghe and inherit Floors Castle. When she heard the news that her sister-in-law was pregnant she was said to have been devastated, but admitted: "The Goelets might as well have the title as they've got the dough, too"! As it would transpire, tragically, Annie outlived her husband and both her sons, neither of whom left a male heir, so despite everything it seems the title and castle would've always alluded her.