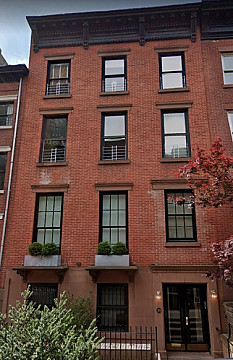 He was born at Providence, Rhode Island. He was a brother of Dr. Hartwell Carver "Father of the Pacific Railroad" and a direct descendant of John Carver (1584-1621) who came over on the Mayflower and was the 1st Governor of Plymouth Colony. He was a merchant, postmaster, store and distillery owner at East Winfield in partnership with Col. David R. Carrier before moving to Mohawk, Herkimer Co., New York. By 1851, he was President of the Mohawk Valley Bank and incorporated the Herkimer County Bank. He was a member of the State Assembly for Herkimer County (1839-41); a director of the Mohawk Valley Railroad Company; a director of the Illinois National Bank; and, a large stockholder and director of the old Marine Bank of Chicago.

In 1856, he was living in a newly completed four-story brownstone at 30 Schermerhorn Street in Brooklyn, New York (pictured), but had moved to Chicago by 1861 where he lived (and died) at 17 Congress Street. He was described in his obituary as, "a man of strong will and positive convictions, of remarkably good judgment, of great business capacity, and of strict integrity. He was honest and upright in all his dealings, and he was a useful and valuable citizen". He married Nancy Lathrop Fish, daughter of Samuel Fish, a farmer of Litchfield, New York. They had six children and he left an estate valued at $250,000.