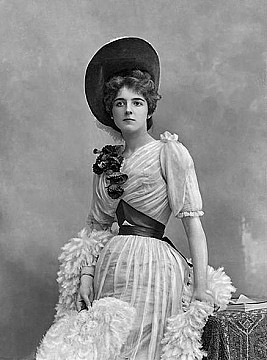 She was born into a family for whom insanity was just a familial trait and scandal followed her almost from day one. Clara was the youngest daughter of Detroit's first millionaire by his second wife who was thirty years his junior. He married her just two months after the death of his first wife who'd divorced him for serial adultery before being committed to an insane asylum where she conveniently died. Clara had one brother and seven elder half-siblings. Her brother, Eber, displayed an unhealthy infatuation with his stepdaughter before running off with his wife's maid. Then there were her half-siblings: John was shot on his boat; Charles was “deranged and eccentric”; Henry was committed to the Michigan State Hospital for the Insane; Frederick committed suicide; Elizabeth was "mentally incompetent"; and, Mary was merely “eccentric”....

Her father died when she was two and almost the entirety of his $6 million fortune was left to her, her mother and brother. For obvious reasons, despite its magnificence, her mother did not linger at the family mansion at 792 Fort Street (which had been left to her step-children) and quickly whisked Clara and her brother off to New York. In 1878, her mother remarried a Canadian millionaire, Alexander Cameron, and they moved with him to Windsor and then Toronto, before Clara was sent to finishing school in England.

After one year in England, Clara was sixteen and had already been booted out of two finishing schools. In the meantime, her mother had grown bored of life in Canada and leaving her husband in Toronto had taken up in Paris where she opened a salon that was immediately popular with the aristocracy. Clara was now brought to Paris and packed off to yet another finishing school, where she went missing only to be found nearly three weeks later in the attic-room of a penniless student. Many stories have been circulated about her various misadventures, some true, some not, but all leave little doubt that she was a spirited, fearless rebel - and a ravishing, extremely wealthy one at that.

Schooling having proved unsuccessful, there was only one thing left for the young heiress: marriage. Having the distinct advantage of being able to pick from the cream of the crop (something most American heiresses could only dream of), her mother singled out a not-so-young Prince, but a Prince no less. Prince Joseph de Caraman-Chimay was the 32-year old cousin of Belgium's King Leopold II. Clara first came to his attention at the opera in Nice on the French Riviera when the entire audience shifted around in their seats to gaze up at her as she took her place in her box - the public and press were captivated.

The Prince's family was wealthy and his title and lofty chateaux were certainly dazzling, but he himself had got entangled in a web of debt. Marrying the teenaged American would not only bag him who the press were now calling, "the most beautiful girl in Europe," but her fortune would clear him of all financial embarrassment. He made arrangements through his sister for a proposal and he and Clara were married in May, 1890.

On marrying, Clara came into her full inheritance of $3 million. After the honeymoon was over, she settled her husband's debts of $100,000 and then spent a further $300,000 on repairs to their 'new' home - his old ancestral seat, the Chateau de Chimay. They frequented the usual watering holes of the wealthy in Europe but spent most of their time at Chimay where Joseph indulged his passion for hunting. Clara quickly became disenchanted with her new life and rumors began to circulate of various affairs. This didn't bother her disinterested husband, but when King Leopold II himself (who was old enough to be her father) became obsessed with her, she now drew the ire of the Queen and the entire Belgian court who insisted that her husband remove her from the country.

By 1896, life had become untenable in Belgium and the young family (Clara was now the mother of two children) moved up to Paris. Clara, who was still only 23, found herself  reinvigorated with life and quickly gained a reputation as "the most riotous" American in the capital. While out at the Café Gaillard (an exclusive night club), Clara first set eyes upon the Hungarian violinist/fiddler Rigó Jancsi who was playing from table-to-table and just ten days later, they ran away together! The press were beside themselves: They had long been captivated by this unconventional heiress, but a Princess running off with a Gyspy fiddler was just too good to be true and they followed them from Paris to Budapest.

In Hungary, Clara took up with Rigo in his mother's cottage in the mountains before they were married in 1898 and left for Egypt where it was said she indulged him with, "a white marble palace and other lavish gifts". But reality soon bit as her mother cut off her allowance which necessitated their return to Paris. She signed a deal with two of the city's best-known nightclubs (the Folies Bergère and Moulin Rouge) to pose on stage in skin-tight costumes while Rigo played violin. One such show was reported in a London paper:

Something in white flashed between us and the semi darkness… I saw that it was the ex-Princesse of Chimay-Caraman, better known to the world at large as Clara Ward. Her beauty was heightened by a loose clinging dress which simply blazed with costly jewels. Then she began her dance to weird, barbaric music, softly, lightly with a voluptuous, sensuous charm, her feet keeping time to the fantastic measure... There was dead silence throughout the crowded theatre. Suddenly a man sprang on stage and in a loud voice declared: ‘I forbid this performance in the name of the Law.’....

It transpired that Clara's ex-husband had appealed to the authorities to stop the performance of the mother of his children. In the meantime, the resourceful former Princess modelled and licensed her image on postcards, though they were banned in Germany as Kaiser Wilhelm II found her beauty "disturbing". She also accepted money for “private performances” and this infuriated Rigo. Stories began to repeat themselves that she had, “quarrelled violently with her gypsy lover (and) loud screams of rage and deep curses were heard issuing from the room at the hotel”. Clara and Rigo divorced in 1904.

Months after her second divorce, Clara was married for the third time to a dashing Italian by the name of Guiseppe “Peppino” Ricciardi who worked on the tourist train that wound its way up Mount Vesuvius either as an agent, waiter or baggage clerk. The marriage lasted until 1911 when he filed for a divorce on the grounds that she was having an affair with their butler - a claim she strenuously denied. That claim then looked somewhat shaky when no sooner was she divorced than she married Abano Caselato (husband number four) who was variously described as either a chauffeur or... a butler! Details of her last marriage were obscure and her family were only made aware of it when he wrote to inform them of her death from pneumonia at their villa in Padua in the north of Italy.

An obituary in the Detroit press read: “She died a woman without illusions. She had gone the pace. She lived intensely, a slave of her desires; she died an outcast, an old woman of 43 years, just when she should have been in her prime”. It was popularly bandied around in the papers that she died penniless, but in fact she left a substantial fortune of $1,124,935 in cash and real estate valued at $50,000. But, as she had not altered her will since her previous marriage, one third went to her ex-husband Guiseppe Ricciardi while the remainder was divided between her two estranged children back in Belgium.

The Girl on the Velvet Swing: Sex, Murder, and Madness at the Dawn of the Twentieth Century By Simon Baatz