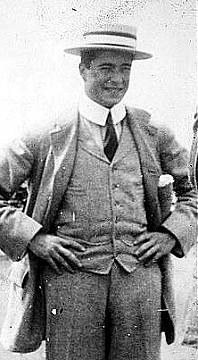 He was born in London but brought up and educated at Harvard in America, paid for by the only member of his family with any money, his self-made maternal grandfather, Frank Work, of New York. His grandfather's will stipulated that he could only inherit from his $14 million fortune as long as he remained in America and had nothing to do with his Irish relatives. But, after the old man died, the family agreed that was a bit much to ask and after a court case he inherited anyway. He spent his early adulthood enjoying life and everything it had to offer for a rich, good looking young man between New York, Paris and London. He was eventually married at the age of thirty six to a young pianist from Aberdeen in Scotland, Ruth Gill, who had been studying at the Conservatoire in Paris. As part of settling down, he was advised to enter politics and rented Hillingdon Hall in Norfolk, which not accidentally happened to border Sandringham which put them in close proximity to the future King George VI and his wife, Elizabeth Bowes-Lyon. Maurice may have been charming and witty, but his friendship with the future King (who unlike his brother was not given to being impressed by flash and money) was more due to the friendship that grew between their wives, the two strong-willed Scottish ladies. He was President of the London Harvard Club. Maurice and Ruth had three children. He is the maternal grandfather of Diana, Princess of Wales.

Blood Royal: The Story of the Spencers and the Royals, by John Pearson