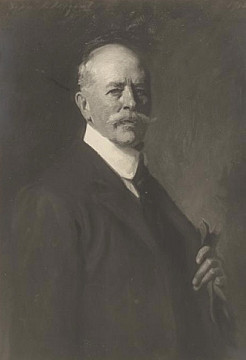 He was born at Boston, Massachusetts, and studied law at Harvard before travelling to Paris to study art with Thomas Couture. In June, 1864, he married the wealthy heiress Isa Cushing and they built The Rocks next door to her brother Robert's property, "The Ledges". Having lived there for five years they sold up and moved to Europe for Ned's career, settling first at Rome and then Paris although they continued to visit the States at least once every year. They were popular members of the American artistic community in Paris and in her autobiography, Edith Wharton referred to Ned as, “the brilliant water-colour painter whose talent Sargent so much admired”. An Impressionist, he was known for his picturesque paintings, particularly of Venice. He exhibited at the Paris Salon in the 1870s-80s, and in 1914 at the Art Institute of Chicago.

His daughters - none of whom married and all of whom grew up "damaged" - are immortalized in John Singer Sargent's famous painting on display at the Museum of Fine Arts in Boston: The Daughters of Edward Darley Boit (1882). According to the New England Historical Society: "Sargent may have picked up on a discordant strain in the Boit family. Fourteen years after he painted the four girls, Edward Darley Boit announced he would marry the 20-year-old friend of one of his younger daughters. Their cousin Mary Boit then visited them in Paris just after the announcement: 'It is a very strange thing and I am more sorry for the girls than anything,' she wrote. 'Uncle Ned quite scares me'". The first Mrs Boit died at Dinard in France and in 1897 he married Florence, 36-years his junior, by whom he had a further two sons before she died in childbirth. He died at Rome.

The Greater Journey: Americans in Paris By David McCullough

Portraits of an Artist: A Novel about John Singer Sargent By Mary F. Burns