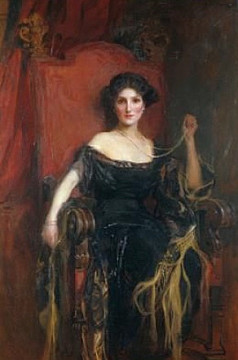 Born in New York City, her father died when she was six and her mother remarried an Englishman, Harry V. Higgins, Director of the Covent Garden Opera House. Her younger sister, Anna, became Lady Innes-Kerr (and sister-in-law to Mary Goelet) and they were two of the nieces of Ohio's own Prussian Princess of Lynar.

Eloise was "charmingly unaffected" and said to have been as musical as her stepfather, who arranged for her to study under the great Signor Allenesi. In looks and character, Eloise "closely resembles her mother, is handsome, of classic type, and also very witty, clever and cultivated". On December 6, 1905, at London, she married the "very quiet and serious" Conservative politician Gilbert Heathcote-Drummond-Willoughby (1867-1931) who was fifteen years her senior and then known as the 25th Baron de Eresby (pronounced "Dursby"), before succeeding his father in 1910 as the 2nd Earl of Ancaster.

Gilbert may have been "very quiet and serious" but prior to marrying Eloise his name was linked to a string of heiresses: In 1894, his engagement to the beautiful "heartbreaker" Muriel Wilson was broken off. According to her family, she broke it off whereas according to him he broke it off because of her, "liberal views about Sabbath observance"! A few years later, "all his friends" were sure he'd wed Lady Norah Hely-Hutchinson (1880-1964), sister-in-law of the American Countess of Donoughmore, but that came to nothing. By 1904, it was widely expected that he would now propose to the U.S. Ambassador's daughter, Muriel White (1880–1943), whose stepmother was a daughter of William Henry Vanderbilt, but she too fell to the wayside. Then came Eloise and, finally, he was smitten!

The Ancasters kept a townhouse in London's Mayfair at No. 8 Chesterfield Gardens, two houses down from another American aristocrat at 4 Chesterfield Gardens. Gilbert inherited two ancestral piles in which they divided their time: Grimsthorpe Castle in Lincolnshire and Drummond Castle in Scotland - the latter being their favorite.

The New York Times reported that, "the Countess is a keen angler and ranks high among the most expert women salmon fishers. She is an enthusiastic sportswoman and has taken great interest in yachting and automobiling. Prior to her marriage she was a flag member of the New York Yacht Club, as well as a member of the Seawannaka Corinthian Yacht Club. She is handsome, of classic type, and very witty and cultivated".