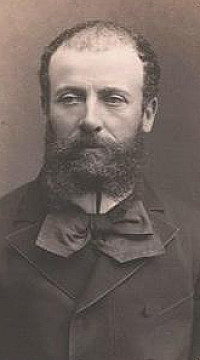 He was born in Paris at 78 Rue du Bac and studied at the École des Beaux-Arts under Émile Gilbert. Graduating in 1861, he served his apprenticeship with Denis-Louis Destors and Charles-Auguste Questel before entering the offices of Antoine-Nicolas Bailly. When Bailley retired in 1865, Sanson continued his practice and quickly developed a reputation among the city's aristocracy for grand townhouses and chateaux in the classical French style of Mansart & Gabriel but with all modern amenities and a cleverness for creating luxury and space: "He outclassed his rivals in the field by his deft manipulation of classical architectural vocabulary, and the sureness of his taste during an age characterised by architectural excess". He later took into his practice his son Maurice, Victor-Guillaume Bariller, and René Sergent. He gained an international reputation with commissions beyond France in the U.S., Argentina, Spain, and Belgium.

In 1884, he was awarded the Grande Médaille d’Argent (Silver Medal) for residential architecture by the Société Centrale des Architectes which they followed up in 1908 with the Grande Médaille d’Or (Gold Medal) in 1908 and in 1911 he was made a Chevalier de la Légion d’honneur. In 1863, he married Marie-Caroline, daughter of Charles-Pierre Scelles, President of the Tribunal of Commerce at Saint-Valery-sur-Somme and Vice-Consul of Sweden and Norway. They had two sons and lived at 84 Rue de Longchamp in the 16th.