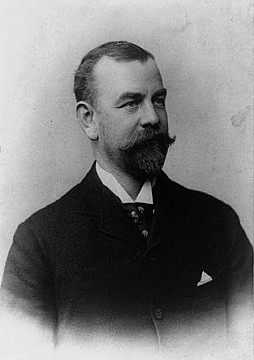 He was born in Boston, Massachusetts, to a family with roots in Maine. He attended public school in New York and started his career with the Atlantic Submarine Wrecking Company. Later, while working at the Mercantile Library of New York and as members of the same golf club, he became friendly with Alfred Corning Clark, President of the Singer Sewing Machine Company. Clark later offered Bourne a job, which he accepted, and he rose within the ranks to become president himself in 1889. He made the business "perhaps the first modern multinational industrial enterprise of any nationality". He and his wife kept an apartment at The Dakota in Manhattan and two impressive country estates. They also kept an apartment on Jekyll Island - "the millionaires club". He was Commodore of the New York Yacht Club.

Image Courtesy of the Library of Congress