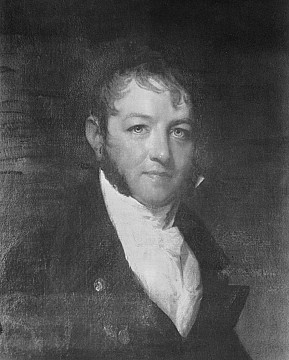 He was born at Newport, Rhode Island. He served his business apprenticeship in Canton, China, before studying in Europe. He was first at Lausanne and then in Paris where he  studied mineralogy under Heinrich von Struve and became friends with the leading European mineralogists of the day. He continued his travels and by the time he returned to Rhode Island he had collected the largest and most valuable collection of minerals ever seen in the States. His 20,000-piece collection that he kept in his mansion in Newport included the 4,000-piece collection of Jean Gigot d'Orcy (1733–1793) and the 6,000-piece collection of Gregoire de Razumowsky. In 1805, he was given the rank of Colonel on being appointed aide-de-camp to the Governor of Rhode Island. In 1811, he was elected a Fellow of the American Academy of Arts & Sciences. In 1822, he was elected Vice-President of the New York Lyceum of Natural History. In 1825, he sold his entire mineral collection to Yale University for $20,000, but this did not stifle his interest. The mineral "Gibbsite" is named for him and he published articles both in the American Mineralogical Journal and the American Journal of Science. He lived between Sunswick in New York and his other mansion in Newport. He married Laura, daughter of Oliver Wolcott Jr., U.S. Secretary of the Treasury, and they were the parents of seven children.