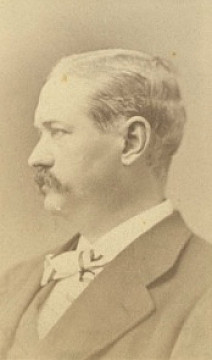 He was born at New York City and like his father became a merchant. In 1855, he was listed as a wholesale dealer in foreign merchandise at 48 Broadway, worth an estimated $150,000. His home was at 58 West 11th Street and he was a partner in Bowers, Beeckman, & Bradford, Jr., at 82 Vesey Street. His business was severely affected by the Financial Panic of 1873 and he suffered a fatal heart attack two days before Christmas, 1874. He and his wife were the parents of five children, and after his death they removed to Newport where it would seem they lived at Land's End.