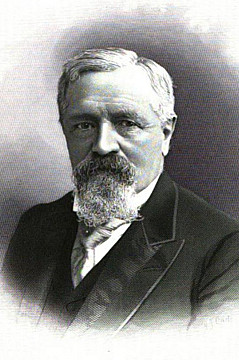 He was born at Louisville, Kentucky, and grew up between his grandfather's townhouse there and his father's plantation nearby. After his marriage in 1846, he became a partner in his grandfather's wholesale hardware business. He quickly became interested in real estate, investing in Louisville and beyond, and from as early as 1840 had recognized Chicago's growing importance in the region. He re-visited Chicago in 1853 becoming convinced it would become the most important city in the west.

In 1855, having disposed of his property in Louisville, he re-invested everything in Chicago real estate. Such was his confidence that others from Louisville soon began to follow. He laid out the Ashland Addition and improved it to create Ashland Boulevard which attracted the city's wealthiest citizens and he too built his home there at No. 231 (see images) in 1858. Later turning his attentions to the south of the city, he was chief among those behind the improvements along Dearborn Street, where he built (and promptly rebuilt after the Great Fire of 1871) two large blocks from Monroe to Adams Street known as the Honoré Block and the Honoré Building. But perhaps most conspicuous among the many improvements he made to Chicago were the south parks he laid out with the wide boulevards that connected them. Today, Honore Street is named in his memory.

He married Eliza (noted for her beauty and intellect) and they had six children. The Honorés lived at 231 Ashland Boulevard from 1858 until 1866 when he sold it to his friend and fellow Kentuckian, Mayor Carter Harrison, who was famously assassinated there in 1893. Honoré bought a new, far larger mansion at 157 Michigan Avenue (see images), at the corner of Adams Street, specifically from which to introduce his eldest daughter, Bertha, into society. She would become the celebrated Mrs Potter Palmer.