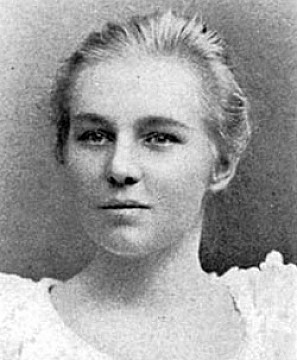 She was born in New York City to a noted landscape artist from an old and wealthy family. In 1879, her parents relocated to Europe and she lived with them predominantly between Paris, Nice and Menton. When she returned to the States, she spoke French better than she spoke English. She was encouraged to pursue the arts and continued her education at The Brearley School in New York and Bryn Mawr College, where she discovered Geology. She graduated in 1900 and continued her studies in geology at the University of Chicago. In 1903, she received her doctorate from Columbia University having studied the geology of the Paradox Lake Quadrangle in New York and that same year was appointed a lecturer at Barnard College in New York City, giving the first course in Geology ever taught there. From about 1912, students from Columbia University began attending her courses making her the first woman to teach Geology at graduate level in a major U.S. university. She became assistant Professor in 1912; associate Professor in 1916; and, Professor in 1938. She was a Fellow of the Geological Society of America; the New York Academy of Sciences; the American Association for the Advancement of Science etc.

In 1917, Ida's friend - and later partner - Delia West Marble, involved her with the Women's Land Army to assist with farming while the men were at war. She toured colleges across the country to encourage interest in the project and successfully recruited 150 women to work at the Bedford Camp on Delia's farm, Airlie, in Westchester County. After the war concluded, twenty women continued to work there. In 1930, Ida bought The Hermitage in the Hudson Valley and transformed it into a dairy farm with Jersey cattle that had previously grazed at Airlie. She rebuilt the house that was started in 1774 and died here at her "beloved" home in 1963.