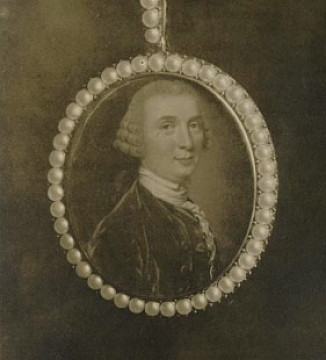 The eighth son of a Scottish Laird, he qualified as a Physician and set off into the world to make his fortune. He travelled to Russia, Bermuda and South Carolina before settling on a plantation in Jamaica. There, he owned 4,404-acres and 473-slaves. He was the uncle of General Sir Paulus Aemilius Irivng, 1st Bt., of Woodhouse, Dumfries. He married Elizabeth Motte, but shortly before they were to be married another a rival suitor stepped onto the scene. He was a very wealthy Englishman named Dawkins, and his offer for her hand exceeded Irving's which forced him to elope. Despite this, he was still welcomed at the house of her father. But, the marriage did not put a stop to Dawkins' advances and tempers eventually boiled over at a party when Irving hurled a decanter at Dawkins. A duel was called with small swords and without seconds, to take take place behind St. Phillip's Church. Both combatants were wounded and lay on the ground "picking at" each other. Both recovered and Dawkins, licking his wounds, returned to England.

James Irving of Ironshore & his Descendants