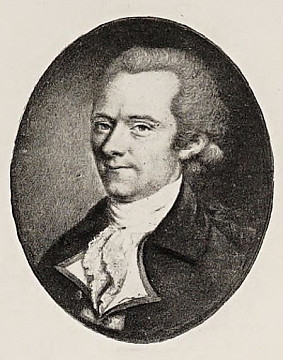 He was born at 68 Whitecross Street in Cripplegate, London. He was the son of a prosperous cheese merchant with land in Aylesbury, Buckinghamshire, worth some £1,300. Before emigrating to America, John set himself up as a brewer at Hatton Garden in London (borrowing against the family land in Aylesbury) and a member of White's Coffee House. He sailed to New York in 1783 bringing with him a copy of the Treaty of Ghent that brought peace to America. He immediately engaged in business starting work as an auctioneer before speculating in government securities and real estate. It was in his last profession as a private underwriter for marine insurance that he made his fortune and then became a founding director of the Mutual Insurance Company of New York and President of the United Insurance Company. He was also a founding trustee of the Tontine Coffee House and a director of the New York branch of the United States Bank. In 1791, his success allowed him to build Sunswick, but a bad turn in the marine insurance business in 1814 forced him to sell up. He also kept a townhouse at No. 9 Pearl Street and he and his wife were the parents of twelve children.