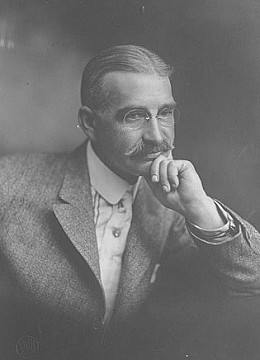 He was born at Chittenango, Madison Co., New York, and grew up in comfortable circumstances in Syracuse. Fragile health and a propensity to daydream meant he was educated at home except for two disastrous years in a military academy. Since childhood, he showed a natural flair for writing and storytelling. He started his career as a stage actor with limited success before opening a store called "Baum's Bazaar" in South Dakota which went bankrupt. He took a job as an editor with the local paper which failed in 1891 and he moved with his family to Chicago where he continued to write for the press and ran a magazine. He wrote his first children's book in 1897 and began making up fantastical stories to tell to his four young sons, and sometimes their friends. On one such occasion in his study, one of the children asked the name of the magical land which he was describing. Casting his eyes around the room they fell on the drawer of his filing cabinet labeled "O-Z." His mother-in-law, Matilda Joslyn Gage, was one of the three most important figures in the Women's Suffrage Movement and she also encouraged her son-in-law to write down his stories. In 1900, Baum published five books, one of which was “The Wonderful Wizard of Oz” and it was an instant hit, making him a celebrity.

His success didn't stop his creativity and over the next two decades he wrote a further fifty odd books, thirteen of which were Oz sequels. Having had favorable results taking Oz on stage, in 1909 he ventured into film but this landed him in debt and triggered a heart problem which had first surfaced when he was a boy. For the benefit of his health and to be closer to his eldest son, Frank, he and his beloved Maud moved to Hollywood where Maud dipped into her inheritance to buy the land on which they could build a comfortable home which he named Ozcot - 'cot' meaning 'small house' in old English. He started a production company, but that too failed and the stress is thought to have attributed to the stroke that killed him at his beloved home in 1919. He was married in 1882 to Maud Gage, a Cornell graduate to whom he was devoted. They were the parents of four sons.

The Real Wizard of Oz: The Life and Times of L. Frank Baum By Rebecca Loncraine