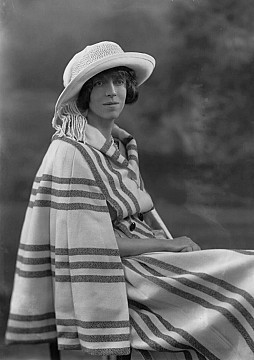 She was the younger daughter of the Anglo-Irish, English-educated 5th (and last) Earl of Desart, Solicitor to the Treasury at Whitehall in London, Queen's Proctor, and Director of Public Prosecutions. She was brought up between London and her family's ancestral home in Ireland, Desart Court that she recalled was, "agreeably like living in a chapter of Reminiscences of an Irish R.M." She was described as a petite blonde (later brunette!) with a keen eye for fashion who spoke with, "a high voice accented by a slight lisp". In her memoirs, she recalled coming out as a debutante and being presented at court to Queen Victoria on a particularly cold winter's day in just a low-cut white chiffon:

... There was something almost Chinese about it. We were dressed like this in order to pay homage to our venerable Sovereign, who, in her youth, had looked her best with her plump white shoulders well exposed. These were our ceremonial garments, to be worn out of respect to her, no matter at what time of day or what weather she chose to receive us.

In April, 1901, Sybil was married at Ennismore Gardens in Knightsbridge, London, to the first of what would-be three husbands, William Bayard Cutting Jr., of New York. Her marriage attracted significant attention as it was, "the first time on record that an Englishwoman of title had married an American". She was given away by her father and looked, "sweet in her wedding dress of white satin with a long court-train of old Brussels lace". Her mother, "afterwards welcomed the army of wedding-guests at her town residence, 2 Rutland Gardens". Just as she was descended from the best Anglo-Irish families, her first husband was descended from all the best families of old New York.

Her husband, "Bayard," grew up in New York between his parents brownstone at 24 East 72nd and their estate on Long Island, Westbrook. A gifted linguist, he was possessed of an, "unceasing intellectual curiosity". He was a great friend of the literary doyenne of America's Gilded Age, Edith Wharton, and she and Sybil were often thrown together, but there was no love lost between them: Initially, Edith had dismissed Sybil as a vapid slave of fashion, but as their acquaintance grew over the years and when she was later married in quick succession to two more of Edith's close friends, the author then began to see the vapid girl - fairly or unfairly - as an insidious, "manipulative sexual aggressor"! For Sybil's part, she found Edith "chilling," her house on Park Avenue, "too studied in perfection" and Edith herself, "alarmingly neat in every detail"!

Bayard had always been troubled by ill health. After his marriage to Sybil they travelled extensively before settling in St. Moritz, Switzerland (1905). A year or two afterwards they moved to Milan where Bayard was the Deputy U.S. Consul. A new posting took them to Tangier in Morocco in 1909 but he resigned within a year in favor of a lectureship on British Colonial Government at his alma mater, Harvard. While on research before returning to the United States he contracted pneumonia in Egypt and died within 10 days.

After Bayard's death, Sybil moved to Italy and in 1911 she bought the historic Villa Medici near Florence. She later had an affair with the extremely influential American art historian Bernard Berenson (1865-1959) before "astonishing" everyone in 1918 when she married Mrs Berenson's protege, Geoffrey Scott (1884-1929), an English architectural historian attached to the British Embassy in Rome. As many might have predicted, the marriage was not a success: Sybil was emotionally needy and "spent more and more time in bed on one pretext or another" while Geoffrey was described as "fragile" and suffered from a nervous condition that made him irritable and prone to headaches and fatigue.

Sybil and George divorced in 1926, and before the year was out Sybil was married again! Her third husband was the English essayist, Percy Lubbock (1879-1965) who was a close friend of the Anglo-American author, Henry James. Lubbock was also homosexual and their marriage was once of convenience which considerably riled Edith Wharton. He joined Sybil at Villa Medici and their arrangement continued until her death. As "Lady Sybil Lubbock" she published several books including an autobiography and her memoirs.

Image Courtesy of the National Portrait Gallery, 1921; No Gifts from Chance: A Biography of Edith Wharton (2010) by Shari Benstock; Gardens in Tuscany, Traveling in Tuscany; Last Curtsey: The End of the Debutantes (2011), by Fiona MacCarthy; Ireland and the Irish in Interwar England (2014) by Mo Moulton