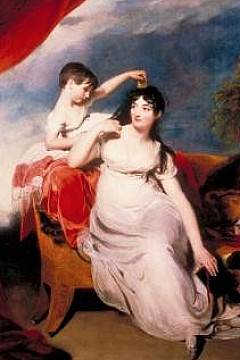 She was born at Bloomsbury Square, London, before her parents moved to Harley Street off Cavendish Square and then returned to America dividing their time between their three houses. She was married three times (1) In April, 1799, aged fifteen in Philadelphia, she eloped with the 39-year old French aristocrat, the Comte de Tilly. The Binghams put a swift end to the union but the Comte demanded an annual pension as his "price to leave the country" while threatening Maria that after her father's death he would insist on, "the rights to her inheritance". The courts ruled the marriage null and void in March, 1800, and he was sent packing back to France with £5,000 and an annual pension of £500. (2) In 1802, at St. Pancras, London, she married her sister's brother, Henry Baring M.P., and they were the parents of five children before their divorce in 1824. Baring remarried Cecilia Windham and had a further eight children. (3) In April, 1826, at the British Embassy in Paris, she married the Marquis de Blaisel, Chamberlain to the Emperor of Austria. She died in London, survived by her five children by Baring.