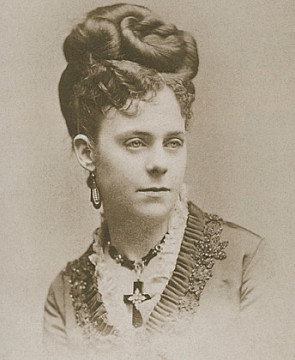 She lost her first husband to alcohol and drug abuse when she was barely 20-years old, with two infant children to support. She had no income and no help from her father who was wrapped up in military affairs in San Francisco. To survive, she gave French lessons and sewed for the Rosener Brothers store. She lived with her one surviving daughter in "genteel poverty" in a furnished room on A Street, Virginia City. Her life changed dramatically on marrying her second husband, the Silver King of Nevada, but he being nouveau-riche and Irish, they were snubbed by New York society. Instead, they happily went to Paris where Louise entertained as the wealthiest American there. Her daughter with whom she had shared their one room in Virginia City went on to marry a Prince and brought with her a dowry of $2.5 million. After her husband died in 1902, she returned to New York and moved into Harbor Hill with her younger son, Clarence.