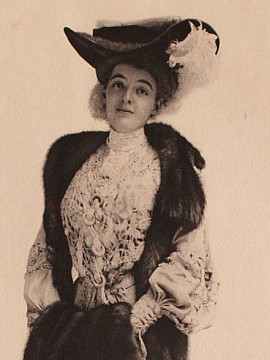 Her life is a tale of two halves. She grew up in the heart of Washington's Patrician society, the daughter of a Virginian General in the Union Army and society belle Adele (Cutts) Williams whose father, James Madison Cutts, was the nephew of First Lady Dolley (Payne) Madison (1768-1749). On July 10th, 1902, she married a multi-millionaire fifteen years her senior, Walter Farwell (1863-1943), of Chicago.

In 1903, a "Beauty Book" was published in the US with portraits and short biographies of the best-looking women across all the major American cities. After a hotly contested vote, Mildred was surprised to find herself named, "the most beautiful woman in America"! In case you're wondering what it took to achieve such status back then, here's your answer:

Mildred: a brunette whose head is poised like Venus and crowned with the darkest hair, while her eyes are of midnight luster. In form she is of classic outline. She walks like a Queen and rides with the perfection of grace. Though she dresses exquisitely and is an authority on household and society matters, she is equally at home in field sports.
Immediately after their marriage, the Farwells spent most of their time at the XIT Ranch in Texas which Walter had inherited and was in the process of selling. It covered a staggering 3 million acres and was enclosed by 6,000 miles of fencing. The Farwells were immediately popular with the cowboys and hosted many parties for them, though they were shocked to find Mildred, the sassy east-coaster, openly smoking with them!

After several years on the ranch, the Farwells yearned for some sophistication and began to adopt England as a second home. Mildred again was immediately popular as a wit and a beauty and in 1909 she was presented at court to Edward VII and Queen Alexandria. In 1913, they bought a townhouse in London at 13 Grosvenor Square, a few doors down from Anthony and Rita Drexel, formerly of Philadelphia. Her life now looked set to be one of unbridled privilege among the leaders of international society... then came the war.

In 1915, Mildred, "startled her friends," leaving England for mainland Europe as an amateur war correspondent - one of only twenty American female journalists to cover the war. The Washington Post reported that, "she insisted always on taking care of herself, and frequently traveled alone on her war assignments". She spent her first six months on the French, Belgian and Italian Fronts, before heading to the new flashpoint in Serbia.

In November 1915, she was trapped and "roughly treated" in a Red Cross Hospital in Monastir, Serbia, when the town was over-run by Bulgarian soldiers. Cut off from the outside world, her husband immediately set out from America to find her but was turned back at the Bulgarian border. She was held captive for 3-months before her release.

In 1917, the same year that the French awarded her the Croix-de-Guerre, she had become the special correspondent to the Chicago Tribune when she was caught up, "in the thick of the riots in Petrograd," finding herself in "a hailstorm of bullets". In the aftermath, she was described as the "genius" who managed to conjure out of a nowhere a veritable feast for the 200 American Red Cross volunteers to celebrate Christmas: Mildred's devoted husband was then a member of the Red Cross Mission and using his influence she managed to obtain, "baking powder from Vladivostok, six thousand 'versts' away to make American layer cakes. The eggs came from Pskoff, up near the Russian Front.."

Her charity in Europe during this period saw her and Anna Mitchell run a canteen at Flirey on the Front Line in France for the American Red Cross; purchase a small printing press for the Albanian Vocational School; and, she, "quietly did any number of nice things not only for the Americans, but for many poor stranded Russians" after the Revolution.

On returning to the States, she was highly praised by her friend, the famous designer Ruby Ross Wood, for single-handedly completing the interior design of Mallow, including its Brown Room which has been so admired and copied by many other designers since. Mildred remained ever active in charitable circles, promoting women's rights and giving generously to the Nurses and the Red Cross. She never had children and predeceased her husband in Manhattan. As she would have liked it, only a small paragraph reported her death and it barely touched on her achievements.