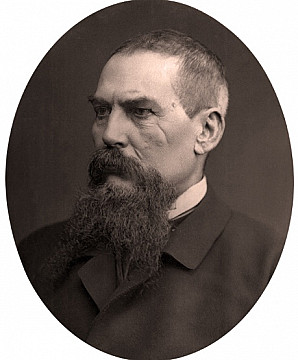 He was born at Torquay, Devon; christened at Elstree near his grandfather's home, Barham House; and, was brought up at the Chateau Beauséjour outside Tours before returning to England for his education. He matriculated at Trinity College, Oxford, where he continued getting into scrapes as he had done at school and was finally rusticated. But, he was already fluent in French, Italian, Greek and Latin, and had started teaching himself Arabic. Instead of returning to Oxford, he became an officer in the 18th Bombay Native Infantry and was posted to India where he embraced Hindu culture to the horror of his fellow officers and learned several native dialects adding to what would become the 29-European, Asian and African languages in which he was fluent. During this period he was disparagingly called "the white nigger" by officers who sneered at him, but he was also feared and known as "Ruffian Dick" for his ferocity, having "fought in single combat more enemies than perhaps any other man of his time".

In 1853, having learned the language and customs of a Muslim, in various disguises he became the first Christian Englishman to take part in the pilgrimage to Mecca and Medina - on pain of death should he have been discovered. In 1854, he took part in the Somaliland Expedition and entered the Holy City of Harar. From Berbera in 1855, he made his first attempt to find the source of the Nile River but his caravan was attacked by some 200-Somali warriors. Some of his group were killed and he was impaled by a spear that went straight through one side of his face and out of the other - the jagged scar added to his already intimidating looks. Having recovered in London, he travelled to Constantinople to fight in the Crimea on being appointed Chief of Staff of Beatson's Horse.
In 1856, the Royal Geographical Society funded his expedition into the Lake Regions of Central Africa, taking with him John Hanning Speke, another British officer who had taken part in the Somaliland expedition. They were plagued by malaria and disease but discovered Lake Tanganyika. Burton's surveying equipment was by then either lost or broken, but he became convinced it was the source of the Nile. Becoming increasingly ill, he stayed there as Speke recovered and carried on, arriving at Lake Victoria. Speke too was unable to survey the lake, but was privately convinced he had found the source of the Nile. They returned to Zanzibar and agreed to give their findings to the R.G.S. together. But, while Burton convalesced, Speke went home and announced his triumph. Burton was furious, and in 1864 they prepared to give their findings in a public debate. The day before, Speke was found dead, shot by his own gun while apparently climbing over a wall.

In 1860, he travelled to Salt Lake City in Utah and the following year was appointed British Consul at Fernando Po in Equatorial Guinea. He spent most of his time exploring the coast of west Africa and took a trip up the Congo River to the Yellala Falls etc. In 1865, he was appointed consul at Santos in Brazil, where he travelled through Brazil's central highlands, and canoed down the São Francisco River from the falls of Paulo Afonso.

In 1868, he was appointed British Consul at Damascus, a key post in The Great Game. His  wife became friends with Jane Digby, calling her "my most intimate friend," while Burton met Charles Francis Tyrwhitt-Drake with whom he collaborated in writing Unexplored Syria. Tensions between Christians, Jews and Muslims were high, and Burton escaped an attack from armed horsemen sent by the Turkish Governor of Syria, when he quipped: "I have never been so flattered in my life than to think it would take three hundred men to kill me." In his struggles to keep the peace between the three religious factions he drew the ire of the Christians and Jews too and was recalled in 1871. In 1872, he was posted to Trieste in Austria-Hungary, where little happened, affording him time to write.

Among the many books he wrote and translated during this period the best received were: 1001 Arabian Nights; The Kama Sutra; The Perfumed Garden; a collection of Hindu tales entitled Vikram and the Vampire; and, an uncompleted history of swordsmanship, The Book of the Sword. His book The Jew, the Gipsy and el Islam was controversial for its criticism of Jews and for its assertion of the existence of Jewish human sacrifices. He also translated The Lusiads, the Portuguese national epic by Luís de Camões. He was a co-founder of the Anthropological Society of London ("to supply travellers with an organ that would rescue their observations from the outer darkness of manuscript and print their curious information on social and sexual matters") and the Kama Shastra Society that printed and circulated books (deemed pornographic) that would be illegal to publish.

Bram Stoker, the man who would later become famous as the author of Dracula, once shared a carriage with the Burtons in Ireland. He wrote: "the lady was a big, handsome, blonde woman, clever-looking, and capable. But the man riveted my attention. He was dark and forceful, and masterful, and ruthless. I have never seen so iron a countenance... I never saw anyone like him. He is steel and would go through you like a sword". In official patrician circles, Burton was more often than not disliked, suspected, and feared. While this damaged his career, socially he thrived on his reputation, enjoying "a Byronic love of shocking people, of telling tales against himself that had no foundation in fact".

In 1886, much to his surprise, he was knighted (K.C.M.G.) by Queen Victoria. In 1861, he married Isabel Arundell, a member of an old Catholic family and grand-niece of the 9th Baron Arundell of Wardour Castle. She was devoted to him, but they died without children. They are buried in a tomb shaped like a Bedouin tent at Mortlake, Surrey.

A Rage to Live By Mary S. Lovell

The Devil Drives: A Life of Sir Richard Burton By Fawn M. Brodie

The Perfumed Garden of the Shaykh Nafzawi By Richard Francis Burton

Vikram and the Vampire By Richard Francis Burton