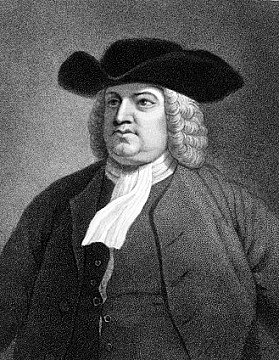 He was born at Tower Hill, London, and was educated at Christ Church, Oxford. In 1681, King Charles II of England granted territories inhabited by the Shawnee and Ohio tribes and by the Munsee and Susquehanna tribes to Penn to settle a £16,000 debt the King owed to Penn's father for his support of the Crown in the Civil War. Penn founded a proprietary colony that provided a place of religious freedom for Quakers. King Charles named the colony "Pennsylvania" ("Penn's Woods" in Latin), after Penn's father, which Penn himself found embarrassing, thinking that people would think he had named the colony for himself. In 1682, Penn came to North America and founded the City of Philadelphia. In total, Penn had 16 children by both his wives, but those listed here are the only ones that survived to adulthood and/or married and had children.