Built in 1906-07 on the Grosvenor estate for the property developers Holloway Brothers on land they leased from the 2nd Duke of Westminster. They employed the architects Read & MacDonald and spent £25,000 (about $120,000) building the mansion which was intended as one single dwelling. Faced in Portland stone, it featured, "a spacious hall and staircase, large intercommunicating rooms on the main floors, and a musicians' gallery". They struggled to find a purchaser and eventually leased it in 1909 to the American banking heir, Anthony Joseph Drexel Jr. (1864-1934)....
zoom_in 1 images 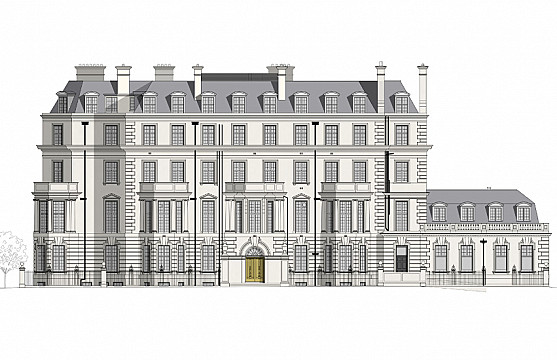 Drexel and his wife Margarita Armstrong employed Sir Charles Allom to make several alterations to the mansion, adding a new, larger ballroom in the style of "Louis XVI" and marbling the floors and staircase. In 1910, the Drexels hosted 1,500 guests here on the occasion of their daughter, Margaretta's, society marriage to Viscount Maidstone (afterwards 15th Earl of Winchilsea). The young couple joined the Drexels here until the Drexel marriage unravelled and Mr Drexel moved to Paris. The Maidstones decamped around the corner to 19 Grosvenor Street. From 1916 to 1925, the mansion was the home of the Chilean Legation. From 1931, it was converted into apartments and after being bombed during the War (1939-1945) it was restored and remains an apartment building.