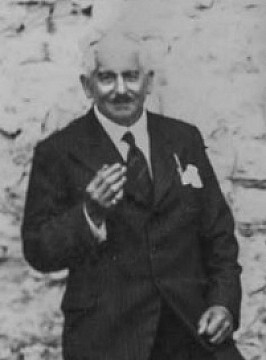 He was born at 19 Cambridge Terrace, Paddington, London. His father was an architect and both his grandfathers were painters who had also been close friends. He was educated at Isleworth, the Royal College of Arts, and in France and Italy. On returning to England he founded White, Allom & Co., Interior Decorators. His taste for classic simplicity coincided with the move away from the old-fashioned Victorian ornate. As the aristocracy rediscovered their 18th Century 'treasures in the attic,' it was Allom who they trusted above all to recreate the elegant rooms for which they'd been designed, frequently sourcing and retrofitting pieces from houses and chateaux all over Europe that were slated for demolition. He frequently loaned his discoveries for exhibitions at the Victoria & Albert Museum and for students of fine art.

He was a Council Member of the Royal Society of Arts and by 1911 'the natural choice' to be the Royal Commissioner for the international exhibitions at Brussels, Turin and Rome. His reputation was sealed when he was asked to do the interiors at Buckingham Palace when the east wing 'front' facade was given a facelift in 1913, for which he was knighted.

During World War I - a war that took two of his children - he adjusted the firm's resources towards manufacturing explosive shells (repeating the process again for World War II) and ventured less successfully into building flying boats. After the war he felt he needed a permanent foot North America, opening an office in Montreal and another in New York on Madison Avenue. In tandem with the art dealer Joseph Duveen he worked on some of America's most notable Gilded Age mansions such as the Frick in New York; Whitemarsh Hall; Ardrossan; and, Lynnewood Hall. He was also the man William Randolph Hearst turned to for St. Donat's Castle. Aside from his excellence in interior design, Charles Carrick Allom was also a remarkably talented all-round sportsman and in later life he was President of the Boat Racing Association and Rear-Commodore of the Royal London Yacht Club. In 1888, he married Laura Tatham and they were the parents four children, and made their home at the Manor House in Totteridge, Hertfordshire.