Built in 1928, for Angelica Livingston Gerry (1871-1960). She named the house for the birthplace in Scotland of her ancestor, Robert Livingston, who first acquired the patent that included the 200-acres on which it stood back in the early 18th Century. The sprawling Georgian-style house that neighbored her brother at Aknusti was designed by Cram & Ferguson, but it was the magnificent English gardens here that put Ancrum on the map - the result of 23-years of work by Fletcher Steele in what was his most extensive project. Among the stunning antiques Angelica displayed here was a set of five Louis XVI Aubusson tapestries that were bought to America by her kinsman, Robert R. Livingston, U.S. Minister to France and senior negotiator for the Louisiana Purchase....
zoom_in 10 images 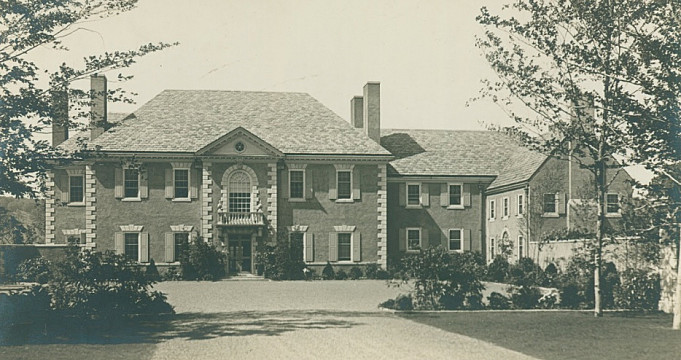 Angelica died unmarried in 1960. In the following year, much of the art and furniture that had adorned Ancrum was sold at auction. Some of the pieces sold included, "a pair of Adam-designed gilded torcheres with candelabra and an Adam-carved and gilded demilune console, decorated in the manner of Angelica Kaufmann. Other items include a Chippendale architect's table, a Louis XV oval writing table in finely worked tulipwood, and another table of the period with marquetry flowers... gold bibelot and portrait miniatures; Georgian and other old silver and Sheffield plate; 18th and 19th century paintings and Chinese porcelain and pottery. There are also lead garden ornaments and Oriental rugs." The house was razed in 1963 following a row over property taxes.