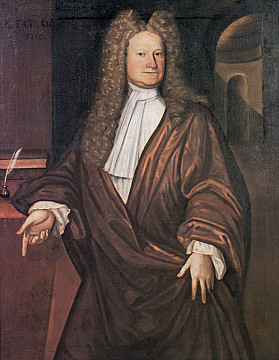 He was born in Scotland at Ancrum, south of Edinburgh, but after his father (a Dissenting Puritan) was exiled the family settled at Rotterdam in Holland. Fluent in Dutch, he became a merchant and emigrated to North America to seek his fortune. In 1674, he settled at Albany, New York, and traded between there and Boston. He and his brother-in-law, Colonel Pieter Schuyler, persuaded Governor Dongan to grant Albany a Municipal Charter and he was appointed Clerk of the City and County of Albany. He served as Secretary for Indian Affairs (1695-1728) and was repeatedly elected to the New York Provincial Assembly, serving as Speaker in 1718. In 1715, he obtained a Royal Patent granting him 160,000-acres along the Hudson River south of Albany. This became known as Livingston Manor and covered land in both Columbia and Dutchess Counties. In 1699, he built the manor house, "Linlithgo", on the north bank of Roeliff Jansen's Kill. Its design was more suited to fending off attacks from hostile Indians than it was for comfort and it was dismantled in 1800 by his descendant, Robert Thong Livingston, but the land itself remained in the Livingston family until 1918. In 1679, Robert married Alida Schuyler (the former Mrs Van Rensselaer) and they were the parents of nine children. The bulk of his considerable estate including the manor house passed to his eldest surviving son, Philip. His second son, Robert, was given 13,000-acres and built Clermont Manor.