Completed in 1829, for Asa Waters (1769-1841) and his wife Susan Trask Holman (1784-1849). This mansion is a lesser-known gem: undoubtedly one of the finest Georgian mansions in America that also brings Linden Place in Rhode Island to mind. Built by a great-grandfather of William Howard Taft (1857-1930), 27th U.S. President, it was enjoyed by five generations of the gun-manufacturing Waters family and was a safe house on the Underground Railroad for slaves escaping from the South. Having been immaculately restored through donations from the local community, today it houses the Millbury Historical Society and is available to hire for weddings and events...
zoom_in 10 images 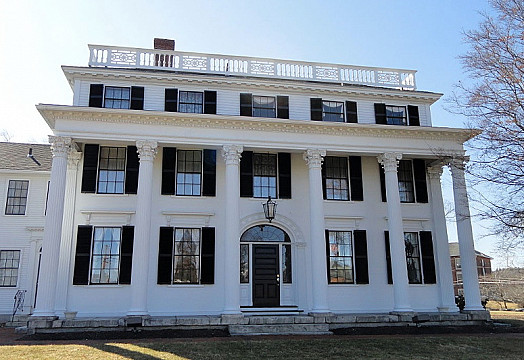 In 1636, Asa Waters' great-great grandfather, Richard Waters (1604-1677), emigrated from London in England to Massachusetts Bay with his mother, stepfather and wife (who was also his stepsister), Rejoice Plasse (1608-1687). At Salem, Richard went into partnership with his father-in-law - and stepfather - William Plasse (1572-1646), Gunmaker, formerly of London. The family gun-making tradition continued down the generations and Asa too became a gunsmith, having learnt the trade in turn from his father.

The Waters & Co. Armory had already made the family wealthy during the Revolution, but it was Asa who established the family fortune. In partnership with Thomas Blanchard (1788-1864), they patented a technique for crafting the barrel of a gun through the use of a lathe and then secured several lucrative arms contracts with the U.S. government.

Having made his fortune, Asa wished to build a lasting testament to both his wife and his success. Some sources have credited the design to Gridley Bryant, but it is generally agreed by historians that the architects were Alexander Parris and Asher Benjamin (1773-1845) of Boston. The master builder was Captain Lewis Bigelow, of Worcester, who was also thought to have had some influence on the ornamentation and overall finish.

It took two years alone just to gather the materials needed to build such a mansion: marble from Italy; mahogany from Central America; bricks fired in Baltimore; hard pine from the Southern States; and, "pumpkin pine" from Maine, etc. In the days before a railway or a canal existed, once shipped to Boston, it was all brought up to Milbury by wagon. The timber frame was put up in June, 1826, and many of the townsfolk gathered around to join the Rev. Mr Goffe in a collation (a ceremony) to bless its construction.

Among its many elegant features, the beautiful free-standing spiral staircase that ascends the full three stories is typical of Asher Benjamin's style. The bannister is made of mahogany and the curves and elaborate twists were achieved by steaming the wood before bending it by hand - not something that could be achieved in a hurry!

Today, the mansion is entered from Elm Street. To the right of the main hall is the Great Room which was originally three reception rooms that could be opened (as it appears now) to create one large space for parties, lectures, plays etc. To the left of the hall is the East Parlor (or Drawing Room), complete with an antique organ made by Tabor & Co. In here, the original 200-year old gold-leaf chandelier still hangs, initially designed to hold a myriad of candles before being retrofitted in the late 19th century for gas lighting. The other principal room on the ground floor is the Rose Dining Room that like all the others contains its original plaster moldings, medallions, door casings and shutters.

It might be imagined that balls were held in the free-flowing rooms downstairs, but this was not the case. The fashion at the end of the 18th century had been to have a Grand Ballroom on the second floor, and the Waters mansion followed suit. The other rooms on this floor were the bedrooms of the master and mistress of the house, and her boudoir. Today, Mrs Waters' bedroom is known as the Bride's Room, reserved for bridal parties.

The third floor was the domain of children rooms (Asa and Susan had eight), guest rooms and servants quarters. Before the mall was built, at this height on the east side of the house the windows opened up onto views of Mount Wachusett. The fourth floor (invisible from the street) was one enormous linen closet, where fugitive slaves once hid.

The mansion was complete by Thanksgiving 1829, which the family celebrated within their new home. But, it wasn't until 1832 that they threw open its doors to society and held a housewarming with a spectacular Christmas Eve Ball. The house had been specifically designed for entertaining on a grand scale and the ball was one to remember:

Numerous musicians, vocal and instrumental, were engaged, an original ode written by the host was printed, and was sung by a choir led by Capt. Timothy Longley. A general invitation was extended, and large numbers attended from this and neighboring towns. Mr. Waters always regarded Christmas with great veneration and hence the day was selected for his house warming.

Visitors "flocked to the completed house as to a wonder". Governor Levi Lincoln (1782-1868) invited Daniel Webster and a party of prominent officials to ride down from Worcester just to marvel at it. Over the years, it became a magnate for the enlightened and political elite from "the Bosphorus to the Pacific": when Henry Clay (1777-1852) was advocating a protective tariff, a reception was held for him in the east parlor; Louis Agassiz (1807-1873), the natural historian and geologist (and great friend of Henry Wadsworth Longfellow) was among the many intellectuals to hold lectures here; and, President William Howard Taft, the abolitionist Abby Kelley Foster, and the inventor of the telephone, Dr Alexander Graham Bell, were all entertained here more than once.

On the Underground Railroad

Asa Waters died in 1841 and the mansion was passed to only son, Colonel Asa Holman Waters (1808-1887). The Colonel was forced to diversify the family business when the government ceased awarding arms contracts to private armories. He closed the armory in 1845 (later re-opened during the Civil War) and branched into textile mills and railroads. He also entered state politics, becoming a passionate abolitionist and member of the Free Soil Party. He travelled throughout the county giving speeches on the cruelty of slavery.

The Colonel's mansion became a safe house on the Underground Railroad and fugitive slaves were hidden on the fourth floor (normally a vast linen store) that is invisible from the street. On the ground floor, the closet under the stairs reveals wooden slats on the back wall that ascend to the top of the house, allowing the fugitives to move freely or escape from the top floor if ever the house was searched by contracted slave-catchers.

Colonel Asa H. Waters spent his last years quietly at home, though remaining ever active in local affairs. In his final years, he said, "I well know what there is abroad, but after all, give me this, my home". He died there peacefully in 1887. He was survived by his wife, Mary, and their three daughters. It was the youngest of their daughters, Florence, who became the last chatelaine of the family mansion, taking up residence with her husband, Henry Ayling Phillips (1852-1926). Mrs Phillips died there without children in 1928.

In 1929, the family sold the mansion. It was purchased by the Roman Catholic Diocese of Worcester who used it as a Rectory for the residing Priest at St. Brigid's Church. It was acquired by Catholic Nuns in 1956 before becoming the seat of the Bishop of Worcester from 1967. Ten years later (1977), having become very run down, it was purchased from the Diocese by the Town of Millbury, serving as the headquarters of  various local organizations such as the Nursing Society and the Millbury Historical Society.

By 1994, the mansion had slipped into a bad state of repair and demolition was considered. But, local townsfolk and businesses rallied round and the necessary works were completed to restore it to its former glory. An inventory from 1844 was found during the works which allowed the restorers to recreate lost architectural features and furnish it with antiques similar in age and design to those that had been collected by the Waters family.

Today, the Millbury Historical Society occupies the second floor, but the otherwise the mansion is available to hire for weddings and events, holding parties of up to 175 people. Asa Waters loved a party, and he'd be proud to see his lasting testament still in all its splendor. Did any of your family live or work here, or do you just love it? If so, "connect" or if you have a story to share, leave a comment, and help preserve all its memories.

The Underground Railroad: A Novel By Colson Whitehead